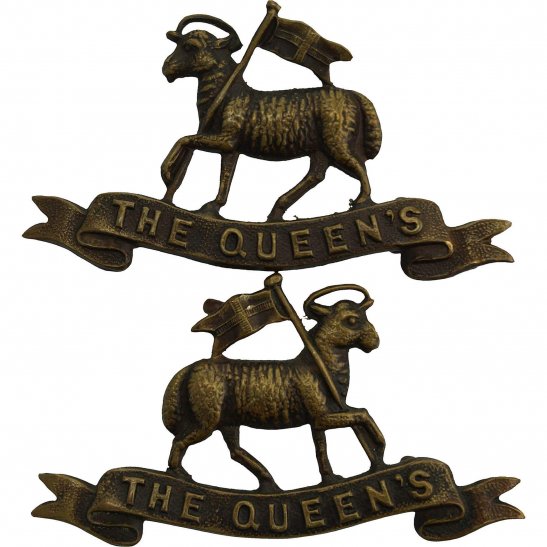 The Queen's Royal Regiment (West Surrey) was a regiment of the English and later British Army from 1661 to 1959. It was the senior English line infantry regiment of the British Army, behind only the Royal Scots in the British Army line infantry order of precedence. In 1959, it was amalgamated with The East Surrey Regiment, to form a single county regiment called The Queen's Royal Surrey Regiment. Following further amalgamations the lineage of the regiment is continued today by the Princess of Wales's Royal Regiment. The Regiment was on garrison duty in Baluchistan when the First Afghan War broke out in 1839. It formed part of the force that attacked the previously-impregnable city of Ghazni, taking the city by storm because the army lacked siege equipment, and opening the way to Kabul. It returned to India in November, 1839, storming the city of Khelat en route, and avoiding destruction along with the rest of Elphinstone's army. It was shipped to the Cape Colony during the Eighth Kaffir War in 1851. On February 25, 1852 a draft of 51 men under the command of Ensign Boyland were aboard HMS Birkenhead travelling from Simon's Bay to Port Elizabeth when the ship struck rocks. The troops were assembled on deck and remained at attention to afford the embarked women and children time to take their place in the lifeboats. Shortly after this the ship broke up and the vast majority of the troops on board were either drowned or fell victim to sharks. The bravery of the troops, made up of cadres from ten different regiments, led to the naming of Birkenhead Drill.

It once again became the 1st Battalion when the 2nd Battalion was reformed in 1857, and went to China in 1860 at the time of the Second Opium War, fighting at the Third Battle of Taku Forts and the capture of Beijing. In 1897-98, it took part in the Tirah Expedition on the North-West Frontier. The 2nd Battalion fought in the Third Anglo-Burmese War from 1886 to 1888 and in South Africa from 1899 to 1904 in the Second Boer War. In 1909, many years after the event, the Regiment was granted the Battle Honour of "Tangier 1662-80?, the oldest in the British Army. The Honour is still held by its successor, the Princess of Wales's Royal Regiment. The 1st Battalion landed at Le Havre in August, 1914, and spent the entire war on the Western Front. The 2nd Battalion was in South Africa when war broke out and was shipped to France in November, 1914. It fought in France and Flanders until November, 1917, when it was sent to the Italian Front, taking part in the battles of the Piave and Vittorio Veneto. The Territorial and New Army battalions undertook a number of duties, including training, garrison duty around the Empire and combat service on several fronts. 270 other rank returning prisoners of war were awarded a "Welcome Home Medal" at a reception in Guildford in January 1919. The medal has the regimental badge on one side and the inscription, " Prisoners of War The Queens Regiment Welcome Home on the reverse and is dated MCMXVIII. Following the armistice troops from the 4th/5th reserve Battalion were involved in a mutinous riot at Clipstone Camp, Nottinghamshire, following disquiet at the slow rate of being demobilised. The 1st Battalion spent the inter-war years on garrison duty, both in Britain and overseas. The 2nd Battalion took part in the Waziristan campaign of 1919-1920, attempting to pacify the tribal areas during the unrest following the Third Afghan War. It was in Palestine during the Insurgency of 1936-1939. The 1st Battalion was in India on the outbreak of the Second World War and fought in the Burma Campaign throughout the war. The 2nd Battalion spent the early years of the war in the Middle East and Syria before also going out to the far East.