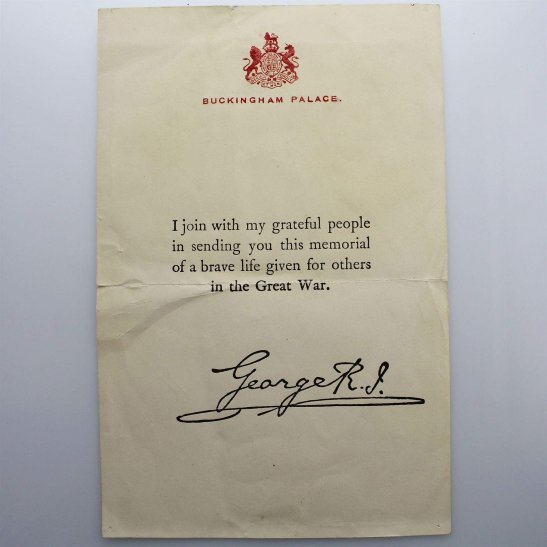 The Memorial Plaque was issued after the First World War to the next-of-kin of all British and Empire service personnel who were killed as a result of the war. The plaques (which could be described as large plaquettes) were made of bronze, and hence popularly known as the "Dead Man's Penny", because of the similarity in appearance to the somewhat smaller penny coin. 1,355,000 plaques were issued, which used a total of 450 tonnes of bronze, and continued to be issued into the 1930s to commemorate people who died as a consequence of the war. It was decided that the design of the plaque, about 5 inches (120 mm) in diameter and cast in bronze, was to be picked from submissions made in a public competition. Over 800 designs were submitted and the competition was won by the sculptor and medallist Edward Carter Preston with his design called Pyramus, receiving a first place prize of £250. This token includes an image of Britannia holding a trident and standing with a lion. The designer's initials, E.CR.P., appear above the front paw. In her left outstretched left hand Britannia holds an oak wreath above the rectangular tablet bearing the deceased's name cast in raised letters.

The name does not include the rank since there was to be no distinction between sacrifices made by different individuals. Two dolphins swim around Britannia, symbolizing Britain's sea power, and at the bottom a second lion is tearing apart the German eagle. The reverse is blank, making it a plaquette rather than a table medal. Around the picture the legend reads (in capitals) "He died for freedom and honour", or for the six hundred plaques issued to commemorate women, "She died for freedom and honour". They were initially made at the Memorial Plaque Factory, 54/56 Church Road, Acton, W3, London from 1919. Early Acton-made plaques did not have a number stamped on them but later ones have a number stamped behind the lion's back leg. In December 1920 manufacture was shifted to the Royal Arsenal, Woolwich. Plaques manufactured here can be identified by a circle containing the initials 'WA' on the back[1]( The "A is formed by a bar between the two upward stokes of the "W") and by a number stamped between the tail and leg (in place of the number stamped behind the lions back leg). The design was altered slightly during manufacture at Woolwich by Carter Preston since there was insufficient space in the original design between the lion's back paw and the H in "HE" to allow an "S" to be inserted to read "SHE" for the female plaques. The modification was to make the H slightly narrower to allow the S to be inserted. After around 1500 female plaques had been manufactured the moulds were modified to produce the male version by removing the S. The plaques were issued in a pack with a commemorative scroll from King George V; though sometimes the letter and scroll were sent first.