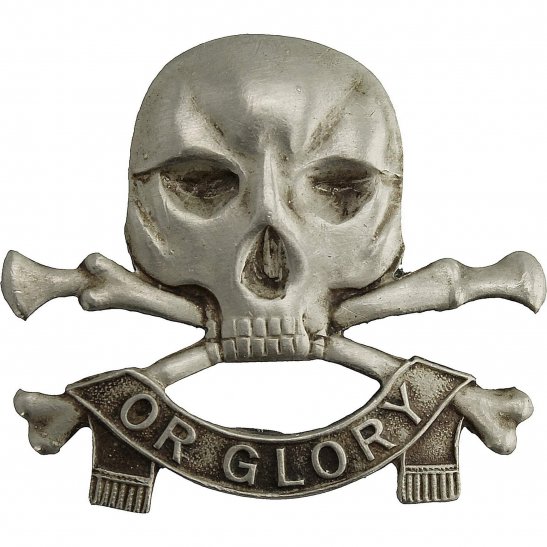 At the beginning of the First World War, the 17th Lancers formed part of the Sialkot Cavalry Brigade of the 1st Indian Cavalry Division. The regiment landed in France in November 1914. In the static warfare of the Western Front, the 17th was often restricted to infantry roles, such as the occupation of trenches. The 17th was eventually used in its conventional cavalry role in 1917, at the Battle of Cambrai, which happened to feature the first large-scale use of tanks. In 1918 the 17th was transferred to the 7th Cavalry Brigade, part of the 3rd Cavalry Division. That year the men got another chance to prove their worth as a cavalry regiment during the last-gasp German Spring Offensive. The 17th functioned as mobile infantry during the attack, plugging gaps whenever the need arose, both as cavalry and as infantry. The 17th also saw service in the British counter-attack, including the Battle of Amiens. It was formed in 1922 in England by the amalgamation of the 17th Lancers (Duke of Cambridge's Own) and the 21st Lancers (Empress of India's). From 1930 to 1939 it was deployed overseas; first in Egypt for two years, and then in India for seven.

In 1938 the regiment was mechanised. On the outbreak of war, the regiment immediately transferred back to the UK. When it arrived it had no equipment apart from rifles and revolvers. Although it was designated as a Heavy Armoured Regiment it never received the equipment; initial training was with a few Medium tanks and some lorries. It was designated as a Divisional Cavalry Regiment in 1940 but given machine guns and vehicles to make it a Motor Machine-Gun Regiment. In this form it was part of the 1st Motor Machine Gun Brigade (with the 16th/5th Lancers, 2nd Lothians and Border Horse) under 12 Corps defending south-east England. It then came under 26th Armoured Brigade in 6th Armoured Division later in the year. A group of personnel from the regiment were detached in December to form the cadre of the 24th Lancers. In November 1942, the division was deployed to Tunisia after Operation Torch. Now equipped with Valentine Mk III and Crusader Mk III tanks, the regiment saw action for some time, including taking heavy losses defending Thala in the Battle of the Kasserine Pass in February 1943 during which all but twelve tanks were put out of action. After this the regiment was withdrawn, and refitted with M4A2 Sherman tanks. In April, an attempt to take the Fondouk Pass again put most of the regiment out of action. The 6th Armoured Division deployed to Italy in March 1944, and fought to breach the Gustav Line. The regiment advanced to the Gothic Line, and spent the winter there at points, serving as infantry rather than as an armoured unit, due to the static nature of the trench warfare there. After the final breakthrough in 1945, the regiment ended the war in Austria. In 1946, the regiment was posted to Greece on internal security duties. In 1947 it deployed to the Suez Canal Zone and re-equipped as an armoured car regiment, and then to Palestine in 1948.