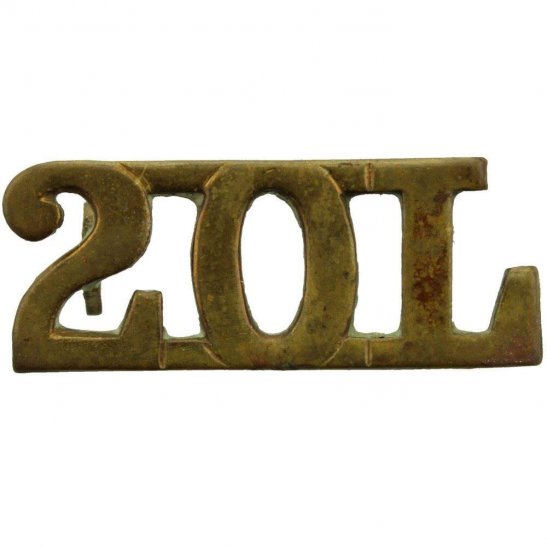 The 20th Lancers was a regiment of the British Indian Army. It was formed in 1922 by the amalgamation of the 14th Murray's Jat Lancers and the 15th Lancers (Cureton's Multanis). After the First World War, the number of Indian cavalry regiments was reduced from thirty-nine to twenty-one. However, instead of disbanding the surplus units, it was decided to amalgamate them in pairs. This resulted in renumbering and renaming of the entire cavalry line. The 14th Murray's Jat Lancers and 15th Lancers (Cureton's Multanis) were amalgamated at Sialkot on 21 September 1920 to form 20th Lancers. The new class composition of the regiment was one squadron each of Punjabi Muslims, Jat Sikhs and Hindu Jats. The uniform of 20th Lancers was dark blue with scarlet facings. The badge consisted of crossed silver lances bearing pennons with a crown at the intersection above "XX" and a scroll below. The regiment was in the 7th Cavalry Group based at Delhi. In 1937, when the number of cavalry stations was reduced, 20th Lancers became the training regiment of 3rd Indian Cavalry Group at Lucknow. Its associated regiments were the 6th DCO Lancers, 7th Cavalry, 8th KGV Own, Royal Deccan Lancers (9th Horse), 19th KGO Lancers, and the Central India Horse. A Jat squadron from the Lancers passed to the 6th Lancers. About this time the Indian cavalry began the process of changing from horses to armoured vehicles but the process was slow. The war speeded up the process and the Lancers became part of the new Indian Armoured Corps. It was converted into a training centre in 1940 and transferred to India after Partition of India.