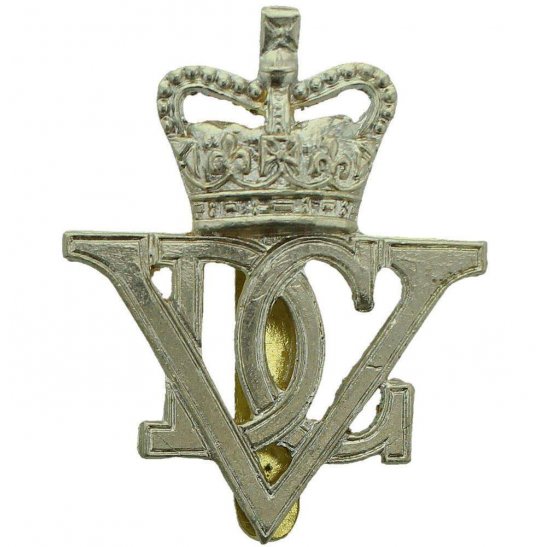 The 5th Royal Inniskilling Dragoon Guards was a cavalry regiment of the British Army in existence from 1922 to 1992, when it was amalgamated into the Royal Dragoon Guards. The regiment was formed in 1922, as the 5th/6th Dragoons, at Cairo, Egypt by the amalgamation of the 5th Dragoon Guards (Princess Charlotte of Wales's) and The Inniskillings (6th Dragoons). On 3 September 1939, two days after Germany had invaded Poland, the UK, France and their Allies declared war on Germany. Equipped with Vickers Mk.VI, the regiment acted as the reconnaissance regiment of the British 4th Infantry Division of the British Expeditionary Force (BEF) that was deployed to the continent shortly after war broke out. On 10 May 1940, the Germans launched their invasion of the Low Countries, thus ending what was known as the Phony War. The German invasion was swift and successful; the Allied forces in Belgium having to retreat to the Scheldt River which the regiment was part of. Fierce fighting continued, the BEF continuing to withdraw further until the order was given for them to withdraw to Dunkirk in northern France. What followed, from 27 May to 6 June, known as Operation Dynamo, was the remarkable evacuation of more than 330,000 British and Allied troops back to the UK; the regiment was successfully evacuated, with the exception of their equipment.

In December 1940, cadres drawn from the regiment and the 4th/7th Royal Dragoon Guards were used to form a new regiment, the 22nd Dragoons, which was disbanded in December 1945. The 5th Dragoon Guards remained in the UK until 1944, when it landed in Normandy a month after the D-Day landings and joined the 22nd Armoured Brigade, 7th Armoured Division (the famed 'Desert Rats'). Heavy fighting was still raging in Normandy and the Regiment took part in actions in Mont Pincon in early August and, subsequently, at St Pierre La Vielle. The regiment saw further service in Northern France, including helping in the capture of Lisieux on 23 August, and later crossing the Risle, advancing rapidly to the Seine. Paris had been liberated on 25 August. The Inniskillings began their advance on Belgium on 31 August-the 7th Armoured Division's objective was the city of Ghent-and crossed the Somme, where the regiment's predecessor regiments had fought during World War I, and Authie rivers. The division's remarkable advance on the Franco-Belgian border could not be maintained as the enormous amounts of fuel consumed had depleted available supplies. Instead, a smaller force, including the Innsikillings, was employed in the effort to capture Ghent; the Inniskillings and the 11th Hussars entered the city on 5 September. The 7th Armoured Division remained in Belgium to take part in operations against the remnants of the German forces and, thus, did not take part in Operation Market Garden.

The regiment subsequently took part in heavy fighting around the Maas river that began in late October. The regiment saw action during Operation Blackcock, the plan to clear the west bank of the Roer of Germans, which commenced on 16 January 1945. The 5th DG subsequently took part in the crossing of the Rhine, which began on 25 March, with the objective of heading eastward, straight for the city of Hamburg. The regiment was now firmly inside German territory, encountering fierce resistance from the Germans. The regiment took part in the capture of a number of towns during the rapid advance into Germany. In April the regiment took part in the efforts to capture Ibbenburen, seeing heavy fighting against the fierce defenders. The regiment saw further heavy fighting elsewhere before it, with the rest of its brigade, headed south for Bremen, where they helped capture Wildehausen. Later, the Inniskillings took part in the successful attack on Soltau before the advance on Harburg, a suburb of Hamburg, resumed. Towards the end of April, the Germans negotiated the surrender of Hamburg, a city that had been devastated by the Allied bombing campaigns; the 7th Armoured Division entered the city on 3 May.