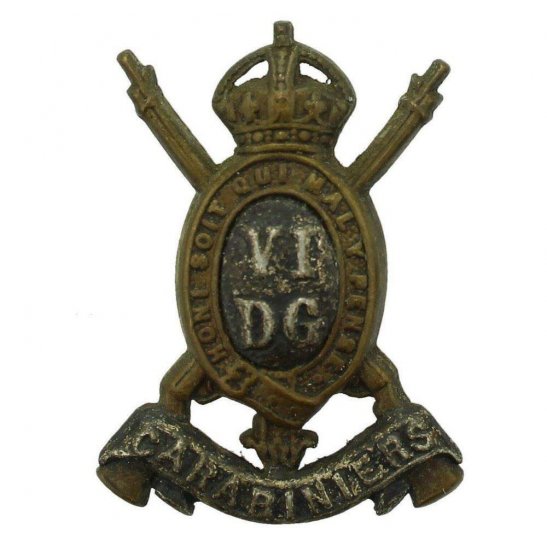 The Carabiniers (6th Dragoon Guards) was a cavalry regiment of the British Army. The regiment was descended from the Ninth Horse regiment, raised in response to the Duke of Monmouth's rebellion in 1685, the first year of the reign of King James II. Colonelcy of the Ninth Horse was given to Richard, 2nd Viscount Lumley of Waterford. In accordance with tradition of the time, the regiment became known as Lord Lumley's Horse. Shortly thereafter, Lumley petitioned the Queen Dowager to permit labeling the regiment The Queen Dowager's Horse, which request was granted. In 1691, during King William's Irish Campaign, the regiment distinguished itself, as a result of which it was posted to London and renamed The King's Carabiniers. The regiment participated in putting down the rebellion of Bonnie Prince Charlie in 1745-46. By this time, it was recruited almost entirely from Irish Protestants, and so the regiment was redesignated the Third Irish Horse, but continued to be known as The Carabiniers. In 1788 a reapportionment of the army establishment resulted in the designation 6th Dragoon Guards (The Carabiniers), which was to remain in place for the next 133 years. The regiment fought under this title through the Napoleonic Wars, to include the Peninsular War; the Crimean War; the Boer War; and World War I.

During the 1800s there was an attempt to convert the regiment to light cavalry, and various appropriate changes to uniform were made, however this change did not come to fruition, leaving various oddities, such as a Light Cavalry sabre, and the Blue and Yellow of British Light Cavalry that would be a lasting legacy. In 1906, the regiment was part of The Cavalry Brigade at the Grand Durbar (the visit of the Prince and Princess of Wales to Bangalore), during which HRH presented a new standard to The Carabiniers. The regiment was in the First and Second Battle of Ypres in Belgium, at the Battle of the Somme, Allenby's attack at Arras, and at Longueval. Following the war, the regiment was on constabulary duty in Ireland from 1919-1922. In July 1922, the 6th Dragoon Guards (The Carabiniers) was returned to England and posted to Aldershot. There, they were amalgamated with the 3rd Dragoon Guards (Prince of Wales's), and this regiment was designated the 3rd/6th Dragoon Guards.