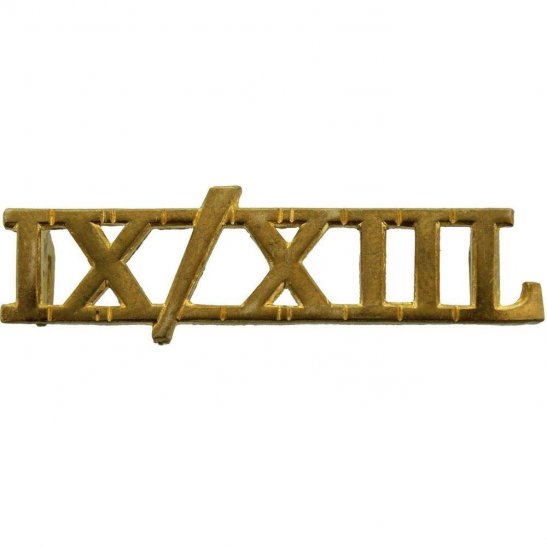 The 9th/12th Royal Lancers (Prince of Wales's) is a cavalry regiment of the British Army, formed in 1960 by the amalgamation of the 9th Queen's Royal Lancers and the 12th Royal Lancers. It is currently a formation reconnaissance regiment, equipped with the Combat Vehicle Reconnaissance (Tracked) family of vehicles and attached to the 7th Armoured Brigade, the Desert Rats. The regiment is based in South Wigston, Leicestershire, along with its affiliated Territorial Army unit, The Leicestershire and Derbyshire Yeomanry, which forms B Squadron of The Royal Yeomanry. The amalgamation of the 9th Queen's Royal Lancers and the 12th Royal Lancers took place on 11 September 1960 in Tidworth Garrison Church. The inscription reads: "Here on the 11 September 1960, 9th/12th Royal Lancers (Prince of Wales's) was formed by the 9th Queen's Royal Lancers and the 12th Royal Lancers (Prince of Wales's) coming together before God. It is not the beginning but the continuing of the same until it be thoroughly finished, which yieldeth the true glory." On 10 May 1972 the regiment received the Freedom of Derby and in January 1975 the whole regiment was deployed Armagh for a four month tour during the Troubles. Squadrons were sent on tours to Cyprus in the late 1980s during the emergency there. D Squadron deployed to the Middle East in 1991 on Operation Granby to provide Battle Casualty Replacements. The regiment was once again at the forefront in 1992 as part of the deployment to Bosnia on Operation Grapple 1. In 1999 the regiment was deployed to Canada as the 'opposing force' for training battlegroups. The regiment took part in Operation Telic in Iraq providing units for Telic 3 in 2004 and then Telic 7 in 2005. It also provided units for Operation Herrick in Afghanistan in 2008. In 2012, as part of the Army 2020 reforms intended to reduce the size of the British Army in line with the Strategic Defence and Security Review, it was announced that the 9th/12th Royal Lancers would be amalgamated with the Queen's Royal Lancers to form a single regiment, The Royal Lancers (RL), in 2015.