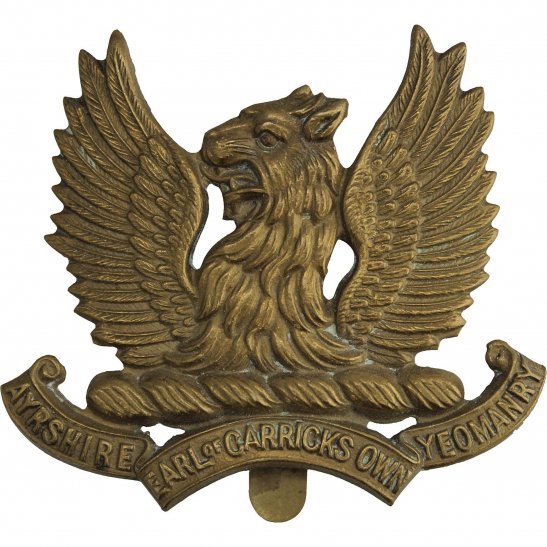 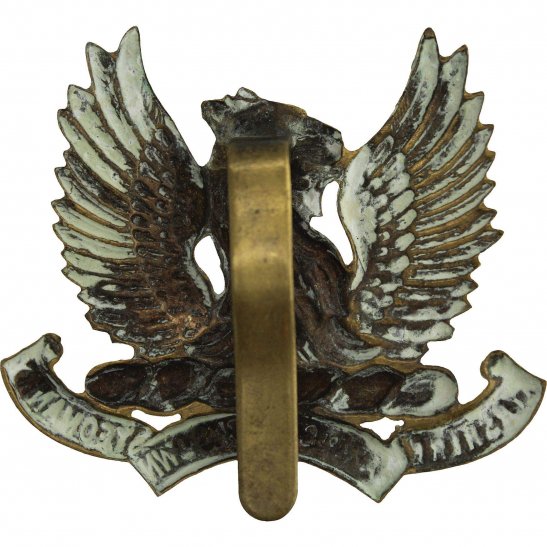 The Ayrshire (Earl of Carrick's Own) Yeomanry was a Regiment of the British Yeomanry and is now an armoured Squadron of the Scottish & North Irish Yeomanry (SNIY), part of the British Army Reserve. On the outbreak of World War I, the Regiment was one of the fastest to react to the mobilisation order and received congratulations from Scottish Command, even though there was an initial delay in that the orders came in a code that had not been issued to the Regiment! Following mobilisation, the Regiment joined the Lowland Mounted Brigade and remained in the United Kingdom, on home defence duties, until 1915. The Regiment finally deployed overseas in September of that year, where it took part in the Gallipoli landings, serving as dismounted infantry. The Regiment was attached to the 52nd (Lowland) Division in October; it was withdrawn in January 1916 and moved to Egypt. In early 1917, the Regiment was amalgamated with The Lanarkshire Yeomanry to form the 12th (Ayr and Lanark Yeomanry) Battalion of the Royal Scots Fusiliers in 74th (Yeomanry) Division (The Broken Spurs), seeing service in the Palestine campaign before moving to the Western Front in May 1918. A member of this Regiment, Thomas Caldwell, won the Victoria Cross on 31 October 1918 at Oudenaarde in Belgium. The 2nd line regiment was formed in 1914. In 1915 it was under the command of the 2/1st Lowland Mounted Brigade in Scotland (along with the 2/1st Lanarkshire Yeomanry and the 2/1st Lothians and Border Horse) and by March 1916 was at Dunbar, East Lothian. On 31 March 1916, the remaining Mounted Brigades were numbered in a single sequence and the brigade became 20th Mounted Brigade, still at Dunbar under Scottish Command.

In July 1916 there was a major reorganization of 2nd line yeomanry units in the UK. All but 12 regiments were converted to cyclists and as a consequence the regiment was dismounted and the brigade converted to 13th Cyclist Brigade. Further reorganization in October and November 1916 saw the brigade redesignated as 9th Cyclist Brigade in November, still at Dunbar. Between the First and Second World Wars, the Regiment returned to its horsed Cavalry training in Scotland. However, when the call to duty came again at the beginning of Second World War, the Ayrshire Yeomanry was faced with a difficult choice, they were not required as a cavalry or as an armoured Regiment and were, instead, asked to fill a gap in the Army's Artillery organisation. In 1940, the Regiment transferred into the Royal Artillery and duly formed two Regiments of Field Artillery; 151st (Ayrshire Yeomanry) Field Regiment RA, formed in February, and 152nd (Ayrshire Yeomanry) Field Regiment, formed in April as a second-line duplicate. The 151st remained in the United Kingdom until 1942, when it was assigned to 46th Infantry Division and fought in the Tunisia Campaign. It was assigned to the 11th Armoured Division in 1944, and remained with it through the campaign in North-Western Europe. The 152nd was attached to the 6th Armoured Division in mid-1942, and moved with the division to North Africa that November. It remained with the division through the remainder of the war, fighting in the Tunisia Campaign, and the Italian Campaign, ending the war in Austria. When peace was declared, the 152nd Regiment found itself in Austria and immediately organised a gymkhana using horses from a local Cavalry depot.