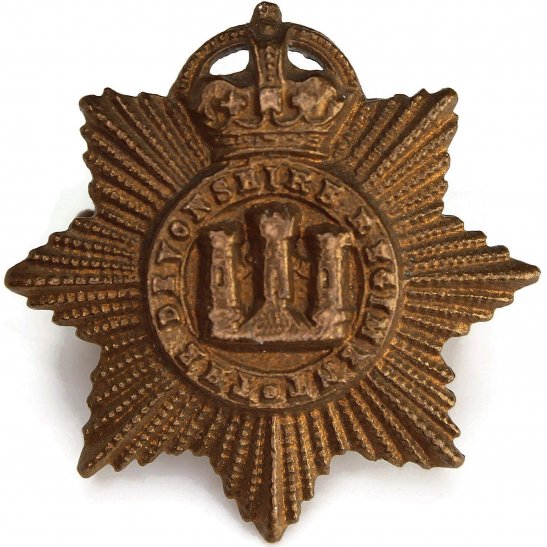 The Devonshire Regiment was an infantry regiment of the British Army which served under various titles from 1685 to 1958. It was given the additional county title of 11th (North Devonshire) Regiment of Foot in 1782. In 1881, under the Childers Reforms it became the Devonshire Regiment, at the same time merging with the militia and rifle volunteer units of the county of Devon. Following the defeat of Napoleon, the regiment spent most of the 19th Century on garrison duty throughout the Empire. It took part in the Tirah Campaign in 1897-1898 and the Second Boer War from 1899 to 1902. The 2nd Battalion was re-formed in 1858 and fought in the Second Anglo-Afghan War, the Ashanti Wars and the Second Boer War. In the Great War, a total of 25 battalions were raised, which fought on the Western Front, in Italy at the battles of the Piave and Vittorio Veneto, Macedonia, Egypt and Palestine, and Mesopotamia. The 9th (Service) Battalion was one of the few British units to reach its initial objectives on the first day of the Battle of the Somme, albeit at the cost of 463 dead or wounded of the 775 men who went 'over the top', with only one officer remaining unwounded.

The 8th (Service) Battalion, part of 29th Brigade reserve, was committed within 3 hours of the beginning of the attack and suffered 208 casualties. The 2nd Battalion was awarded the French Croix de guerre for its gallant defence of Bois des Buttes on 27 May 1918, the first day of the Third Battle of the Aisne The 1st Battalion was in India when the Second World War broke out, and spent the entire war in India, Ceylon and Burma. The 2nd Battalion was part of 231st Infantry Brigade for the duration of the war, fighting in Malta, Sicily, and Italy. On D-Day, it was intended that the Battalion should land at Le Hamel, on Gold Beach, behind the 1st Hampshires. However, owing to adverse sea conditions and an unexpectedly high tidal surge, three of the four Companies were carried over a mile to the east before they could make landfall and had to make their way to their assigned assembly point on foot. Of the four Company commanders, two were wounded and one was killed. The Battalion continued to fight with the 231st Brigade throughout the Battle of Normandy and the liberation of North-West Europe. The 12th Battalion was part of the 6th Airlanding Brigade, 6th Airborne Division and landed in Normandy on 6 June 1944 in Operation Mallard. The battalion also fought in the Battle of Breville, the Battle of the Bulge and crossed the River Rhine in Operation Varsity.