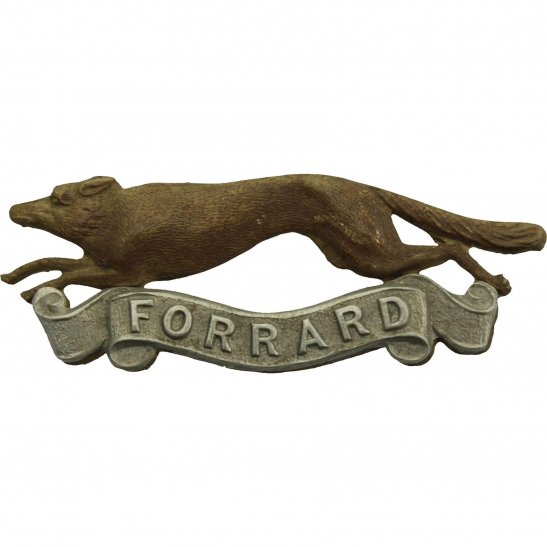 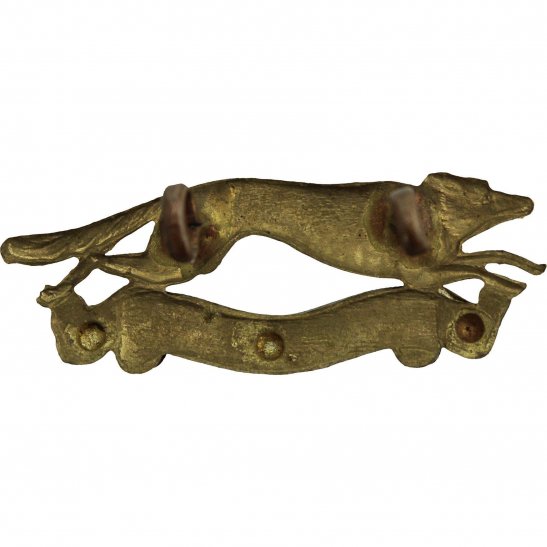 The East Riding of Yorkshire Yeomanry was a unit of the British Army from 1794-1956. The 1/1st moved north in November 1914 as Divisional Cavalry for the 2nd Northumbrian Division. On 20 May, the regiment formed part of a parade of some 40,000 men before H.M. The King and Lord Kitchener. The regiment was then ordered south to Filey and then to East Anglia, to form part of the 1/1st North Midland Mounted Brigade. In October 1915 they set sail for Alexandria. In 1916, the regiment was part of the Western Frontier Force, a dreary job, causing a number of NCOs and men to join the newly formed Imperial Camel Corps and 120 officers and men to be detached for service under T. E. Lawrence. In December 1916, the 22nd Mounted Brigade moved to the Suez Canal Zone to form part of the ANZAC Mounted Division. The regiment first saw action during the First Battle of Gaza, a hard engagement for both the men and the horses, and in the Second Battle of Gaza it was posted to the far right flank. In General Allenby's reorganisation 22nd Mounted Brigade transferred to the Yeomanry Mounted Division. In October 1917, the regiment took part in the Third Battle of Gaza, and on 13 November at El Mughar, supported a charge by 6th Mounted Brigade. 'A' Squadron, commanded by Maj. J.F.M. Robinson M.C., led 22nd Mounted Brigade, having captured their objective they pressed on to Akir and established a position on the far side of the village square, however they had to withdraw as they were unsupported by the rest of the brigade. Sadly it transpired that the village was the location of a Turkish Corps Headquarters, and had the success of the attack been exploited then a major dislocation of the enemy lines could have resulted. El Mughar was the last great cavalry charge of the British Army.

In December 1917, with the exception of the machine gun section, the regiment was dismounted and sent to France. Together with the Lincolnshire Yeomanry, it formed 102 Bn, Machine Gun Corps (Mobile). The battalion saw action several times in the closing months of the war in the area around Cambrai supporting attacks by the 49th (West Riding) Division, 51st (Highland) Division and 56th (London) Infantry Divisions. In March 1940, after training at Tidworth, the 1st Regiment joined the BEF in France as part of 1st Armoured Reconnaissance Brigade, initially the Corps Cavalry to 3 Corps. However, in May the Regiment passed under the command of 48th (South Midland) Division, 44th (Home Counties) Division, Macforce, and finally back to 48th (South Midland) Division. The Regiment was first involved in fighting near Ath, south of Brussels, and then over the next fortnight fought seven rearguard actions before being finally surrounded at Cassel on the night of 29/30 May in the company of 145th Brigade. As rearguard to the Brigade's breakout, the F echelon was fatally exposed.

The remnants of 1ERY (7 officers and 230 men) returned to Tidworth, where the Regiment was brought up to strength by drafts from the 2nd Regiment, before moving onto Bovington to rejoin 1st Armoured Reconnaissance Brigade. They next deployed to Essex for anti-invasion duties, where it was equipped with Beavettes. When new material became available in Spring 1942, the Regiment reequipped with Covenanter tanks and Honeys, and formed 27th Armoured Brigade, together with the 4th/7th Royal Dragoon Guards (replaced by the Staffordshire Yeomanry, in January 1944) and the 13th/18th Royal Hussars. In April 1943, the Regiment again reequipped, this time with Sherman Duplex Drive tanks. The training all came to fruition on 6 June 1944, when the Regiment landed on D Day supporting 9th Infantry Brigade in 3rd Division,[14] and for the following fifty days they took part in the bridgehead battles. During this period they also supported 59th (Staffordshire) Infantry Division. Because of casualties, 27th Armoured Brigade was broken up on 29 July, and on 16 August the Regiment joined 33rd Armoured Brigade, taking over the petrol MK1 & II Shermans of 148 Regt RAC. The Regiment was now attached to 51st (Highland) Division, for the final Falaise Pocket Battles, the advance to the River Seine, its crossing and the taking of St Valery-en-Caux; after which the Regiment transferred to 49th (West Riding) Division for the Battle of Le Havre.