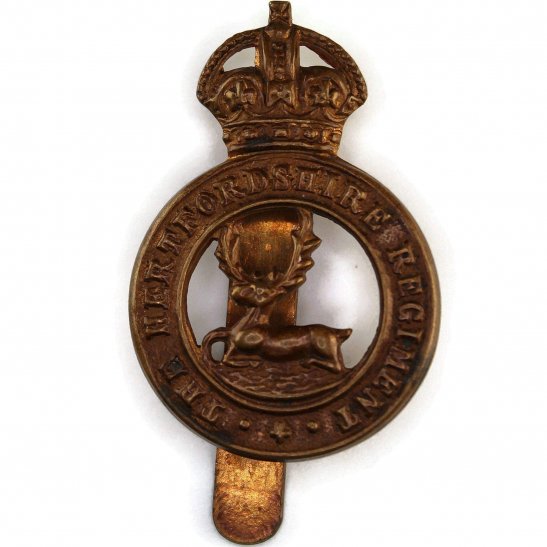 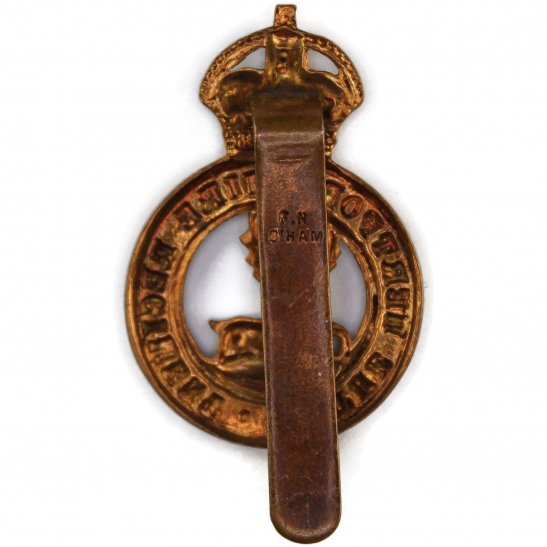 The Hertfordshire Regiment was a territorial infantry regiment of the British Army. Originating in units of Rifle Volunteers formed in 1859, the regiment served in the Second Anglo-Boer War and the First and Second World Wars before losing its separate identity in 1961. Its lineage is continued today by the Royal Anglian Regiment. On the outbreak of World War One, the 1st battalion was embodied at Hertford under the command of Lieutenant Colonel Brand. It joined the British Expeditionary Force in France on 6 November 1914, serving in the trenches during the closing stages of the First Ypres. Later that month the battalion joined the 4th (Guards) Brigade of the 2nd Division. Due to this attachment, it acquired the nickname the Hertfordshire Guards, and adopted many Guards' peculiarities, including the numbering of its companies.

In January 1915 Lieutenant Colonel Croft took command and the following month the battalion supported the 1st Irish Guards and 3rd Coldstream Guards in their seizure of the Brickstacks position at Cuinchy. In May it was again in action during the Battle of Festubert, consolidating the advance of the Irish Guards under heavy shellfire. On 19 August 1915 it was moved to the 6th Infantry Brigade within the same division, in time for the Battle of Loos. On 27 September the battalion, alongside 1st King's (Liverpool Regiment), was due to assault the enemy lines beside Cuinchy. The attack however, was cancelled due to the failure of the gas released as its preliminary to impact the enemy. Much of the following winter was spent in the Artois, rotating between service in the trenches and the reserve. In February 1916 Croft was appointed to command a brigade and Lieutenant Colonel Page DSO took over the battalion, which during the same month was moved to the 118th Brigade of 39th Division. Subsequently the battalion was involved in the Battle of the Somme. On 14 October 1916 it supported the 1/1st Cambridgeshire Regiment and 4/5th Black Watch in the capture of the Schwaben Redoubt. In the final stage of the campaign, the Battle of the Ancre, the Hertfordshires achieved a notable success. On the morning of 13 November, their advance covered by mist and a heavy artillery barrage, the battalion seized the whole of the Hansa Line. It advanced to a depth of 1,600 yards, achieved all of its objectives and captured 250 prisoners and nine machine-guns. The position was held until relief the following night. The cost of this action in casualties numbered seven officers and 150 men.

During World War Two the 1st battalion mobilised on the outbreak of war, joining the 54th Division on coastal defence in October 1939. It remained employed on such duties until March 1943, when it was ordered to prepare for overseas service. It arrived in Gibraltar on 22 April, under the command of Lieutenant Colonel G.W.H. Peters MC. It remained there for over a year, much of the time spent training, before being deployed to Italy in July 1944 where it joined 66th Brigade of the 1st Infantry Division. It moved into the frontline on 19 August, relieving 6/13th Frontier Force Rifles northeast of Florence. On the 31 August the battalion advanced on Fiesole, clearing the village of the enemy by midnight. On 2 September it was relieved and moved up the main axis of the advance north of the city, codenamed 'Arrow Route', against an enemy withdrawing to the Gothic Line positions. On 14 September the battalion played a part in securing the first break into the Gothic Line. Following artillery preparation and smoke, two companies outflanked the German outpost line and pressed up the Poggio Prefetto, seizing the summit and holding it until relieved. Meanwhile, on their left, American troops made a similar advance.