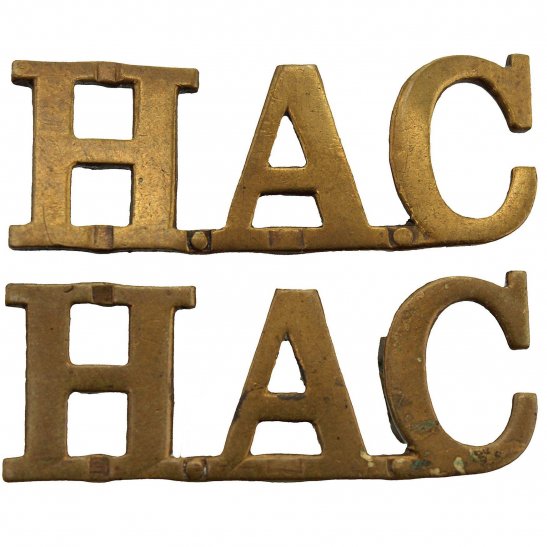 The Honourable Artillery Company was incorporated by Royal Charter in 1537 by King Henry VIII and is the second oldest military organisation in the world (behind the Vatican’s Pontifical Swiss Guard). Today, it is a registered charity whose purpose is to attend to the “better defence of the realm”. This purpose is primarily achieved by the support of the HAC Regiment and a detachment of Special Constabulary to the City of London Police.

In September 1914 the 1st Battalion followed the British Expeditionary Force to France and fought in the 1st Battle of Ypres. After the fighting at Ancre (1916) and the Arras (1917), it became an officer training battalion and provided demonstration platoons. Elements of the battalion were used to help quell the Étaples Mutiny. The 2nd Battalion HAC was raised in August 1914; it was in France by October 1916 and in action on 25 February 1917 at Bucquoy. They also fought at the Battle of Arras in May and the 3rd Battle of Ypres in October. In November 1917, the battalion moved to the Italian Front under the command of the then Lt Col Richard O’Connor.

Both A and B Batteries of the Honourable Artillery Company went to Suez in April 1915. In July, B Battery fought in the recapture of Sheikh Othman (key to the water supply to Aden) from the Turks as part of the Aden campaign. In February 1917, both batteries took part in the Palestine Campaign, were in action at the First and Second Battle of Gaza and entered Jerusalem in December 1917. In the German counterattack during the Second action of Es Salt on 1 May 1918, A Battery was forced to make a rapid withdrawal under heavy fire, which resulted in the loss of all its guns. Both A and B Batteries took part in the Battle of Megiddo in September. A third battery, the 309th (HAC) Siege Battery, went to France in April 1917 and saw action at the Battle of Messines and the Battle of Amiens.

In 1939, the Infantry Battalion became 162 (HAC) Officer Cadet Training Unit, this was the Officer Training Unit of the Reconnaissance Corps. In 1942 101 RAC OCTU amalgamated with 162 Reconnaissance Corps OCTU to form 100 RAC OCTU based at The Royal Military College, Sandhurst. In addition, the company provided four regiments of artillery.
The 11th (HAC) Regiment, Royal Horse Artillery served in North Africa at the Battle of Knightsbridge with 25-pounder guns and, after re-equipping with the M7 Priest self-propelled gun, in the Second Battle of El Alamein. The regiment’s guns were the first guns ashore in the invasion of Sicily; then they took part in the Allied invasion of Italy and the Italian Campaign.
The 12th (HAC) Regiment, Royal Horse Artillery took part in the Operation Torch landings and were in action at Thala in February 1943, where they halted a German advance following the Battle of the Kasserine Pass. After re-equipping with Priests, they too moved on to Italy in March 1944 and fought at Monte Cassino.
The 13th (HAC) Regiment, Royal Horse Artillery (equipped with Sexton self-propelled guns) fought in Normandy, the Netherlands and across the Rhine into Germany as part of 11th Armoured Division.
The 86th (HAC) Heavy Anti-Aircraft Regiment took part in the defence of the Capital during the London Blitz. The regiment was the first heavy AA unit ashore after D-Day and they operated in the anti-aircraft and ground support roles across north-west Europe, including the defence of Antwerp against a V-1 flying bomb barrage. Over seven hundred members of the Company lost their lives during the Second World War.