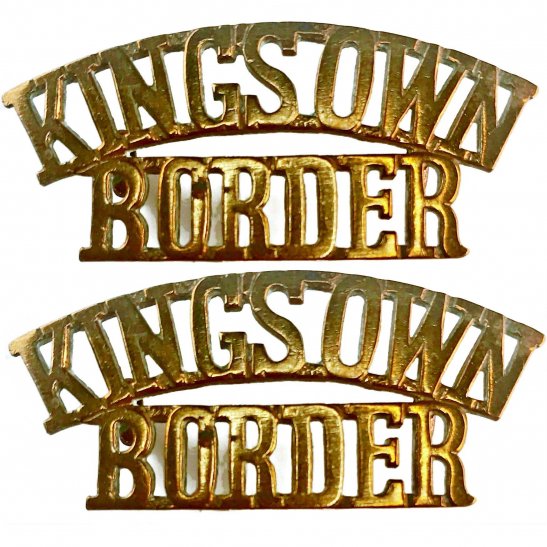 The King's Own Royal Border Regiment was an infantry regiment of the British Army in existence from 1959 until 2006, and was part of the King's Division. It was formed at Barnard Castle on 1 October 1959 through the amalgamation of the King's Own Royal Regiment (Lancaster) and the Border Regiment. The official abbreviated form of the regimental title was 'KING'S OWN BORDER'. The regiment's earliest forebears were the 4th, or Kings Own Regiment of Foot, formed 13 July 1680 as the 2nd Tangier Regiment, also known as 'Charles Earl of Plymouth's Regiment of Foot for Tangiers', being the fourth regiment of foot in seniority in the British Army. The 34th (Cumberland) and 55th (Westmorland) Regiments of Foot were formed later in 1705 and 1755, respectively. In 1881 they amalgamated to form the Border Regiment. The 1 October 1959 amalgamated regiment preserved traditions of the previous three regiments (4th, 34th and 55th). Every 28 October, the regiment would celebrate "Arroyo Day" by parading the French drums and French drum major's mace captured during the Peninsular War in 1811. They had been taken intact in the Battle of Arroyo dos Molinos from the French 34e Régiment de Ligne on 28 October 1811.

The regiment saw a great deal of service in Northern Ireland during the troubles. The regiment was twice awarded the Wilkinson Sword of Peace for work in both Derry and Bosnia. In 2004, as part of the restructuring of the infantry, it was announced that the King's Own Royal Border Regiment would amalgamate with the King's Regiment and the Queen's Lancashire Regiment to form the new Duke of Lancaster's Regiment (King's Lancashire and Border). The Regiment's final act was to serve in Iraq between 2005 and 2006. The new regiment was formed on 1 July 2006, with the Kings Own Royal Border Regiment forming the 3rd Battalion.