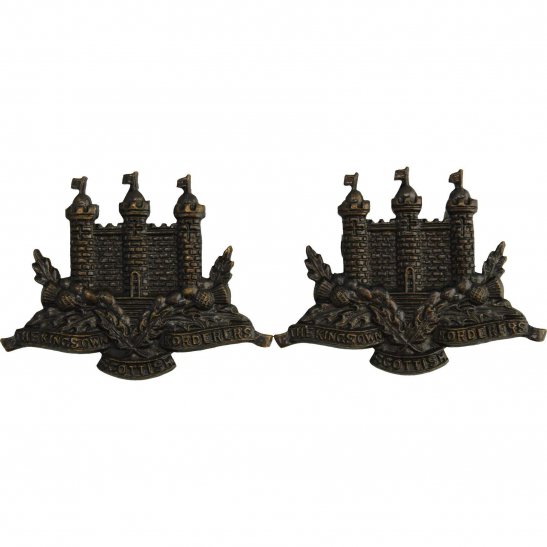 The King's Own Scottish Borderers was an infantry regiment of the British Army, part of the Scottish Division. The regiment was awarded the right to bear the emblem of the Sphinx for their role in the Battle of Alexandria in 1801. Its recruiting area was moved to the Scottish Borders region in 1805 from when the regiment became known as the King's Own Borderers. During the Second Anglo-Afghan War in 1878 to 1880, the second division was renamed the Khyber Line Force while guarding the lines of communication between Kabul and Peshawar. The regiment became known as the King's Own Scottish Borderers in 1887. The regiment saw service during both World Wars. During the First World War, the regiment was enlarged to nine battalions and served in notable campaigns such as Gallipoli and the Somme.

In between the wars, the regiment's regular battalions were sent all over the British Empire to Ireland, Egypt and Hong Kong but were quickly recalled home at the outbreak of World War II in 1939. One of its heaviest losses during the war was at the ill-fated Battle of Arnhem in which nearly 90% of the 7th battalion were killed in action; the unit was part of the 1st Airborne Division and defended the perimeter in Oosterbeek against 2nd SS Panzer Corps. Several of the other battalions were dispatched to Southeast Asia and fought against the Japanese in the Burma Campaign and in India. After the war, the regiment served internal security duties in Palestine and was reduced to a single battalion in around 1948. The regiment was part of the UN forces deployed to the Korean War. Between 1972 to 2004, the regiment was regularly posted to Northern Ireland as part of Operation Banner to maintain stability during The Troubles. They were most notably victims of the 1989 Derryard attack which killed two of their men. During the 1990s, they were one of the few Scottish regiments not deployed to the Yugoslav Wars but were mainly stationed in Northern Ireland instead. The regiment also served in Iraq on Operation Telic in 2003.