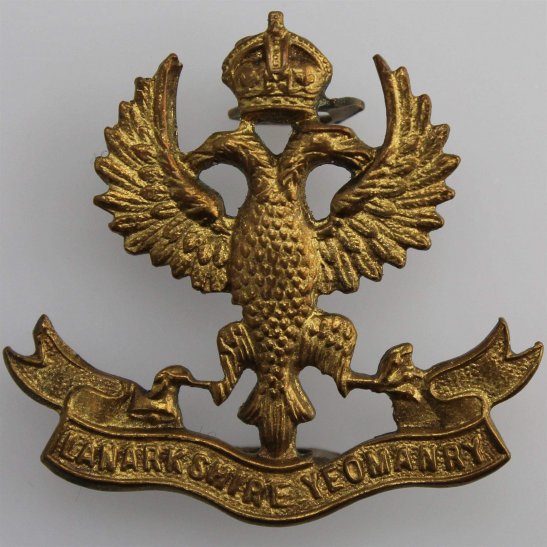 The Lanarkshire Yeomanry was a yeomanry regiment of the British Army, first raised in 1819, which served as a dismounted infantry regiment in the First World War and provided two field artillery regiments in the Second World War, before being amalgamated into The Queen's Own Lowland Yeomanry in 1956. The Yeomanry was not intended to serve overseas, but due to the string of defeats during Black Week in December 1899, the British government realized they were going to need more troops than just the regular army. A Royal Warrant was issued on 24 December 1899 to allow volunteer forces to serve in the Second Boer War. The Royal Warrant asked standing Yeomanry regiments to provide service companies of approximately 115 men each for the Imperial Yeomanry. With the Ayrshire Yeomanry, the regiment co-sponsored the 17th (Ayrshire and Lanarkshire) Company for the 6th (Scottish) Battalion in 1900; in 1901 it provided the 107th (Lanarkshire) Company. In 1901, the regiment was reorganized as mounted infantry as the Lanarkshire Imperial Yeomanry. In 1908 it was transferred into the Territorial Force, returning to a cavalry role and equipping as lancers, under the new title of the Lanarkshire Yeomanry.

The regiment mobilised into the Lowland Mounted Brigade in August 1914, but remained in England until 1915. They landed at Gallipoli in September 1915, serving as dismounted infantry, and were attached to 52nd (Lowland) Division in October; they were withdrawn in January 1916 and moved to Egypt. In early 1917 the regiment was amalgamated with The Ayrshire Yeomanry to form the 12th (Ayr and Lanark Yeomanry) Battalion of the Royal Scots Fusiliers in 74th (Yeomanry) Division, seeing service in the Palestine campaign before moving to the Western Front in May 1918. Whilst on the Western Front, Sergeant Thomas Caldwell of the regiment was awarded a Victoria Cross.

The 2nd Line regiment was formed in 1914. In 1915 it was under the command of the 2/1st Lowland Mounted Brigade in Scotland (along with the 2/1st Ayrshire (Earl of Carrick's Own) Yeomanry and the 2/1st Lothians and Border Horse) and by March 1916 was at Dunbar, East Lothian. On 31 March 1916, the remaining Mounted Brigades were numbered in a single sequence and the brigade became 20th Mounted Brigade, still at Dunbar under Scottish Command. In July 1916 there was a major reorganization of 2nd Line yeomanry units in the United Kingdom. All but 12 regiments were converted to cyclists and as a consequence the regiment was dismounted and the brigade converted to 13th Cyclist Brigade. Further reorganization in October and November 1916 saw the brigade redesignated as 9th Cyclist Brigade in November, still at Dunbar. About May 1918 the Brigade moved to Ireland and the regiment was stationed at Derry. There were no further changes before the end of the war.

The regiment apparently did not mechanise before the outbreak of the Second World War; after mobilisation, it was converted to the artillery role. It transferred into the Royal Artillery in February 1940 as 155th (Lanarkshire Yeomanry) Field Regiment, RA; in April 1940, 156th (Lanarkshire Yeomanry) Field Regiment, RA was formed as a second-line duplicate. Both served as field artillery regiments.