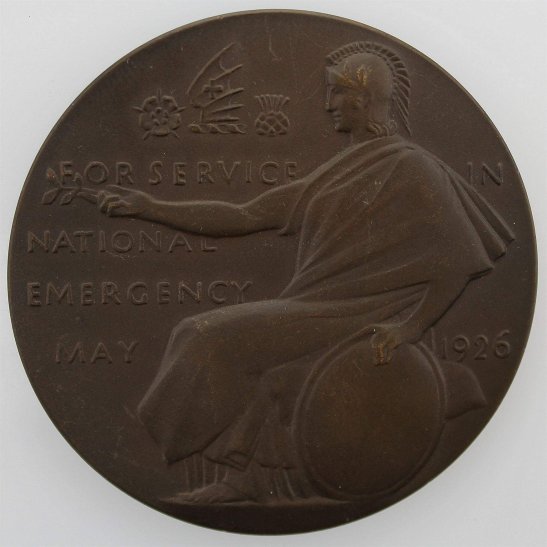 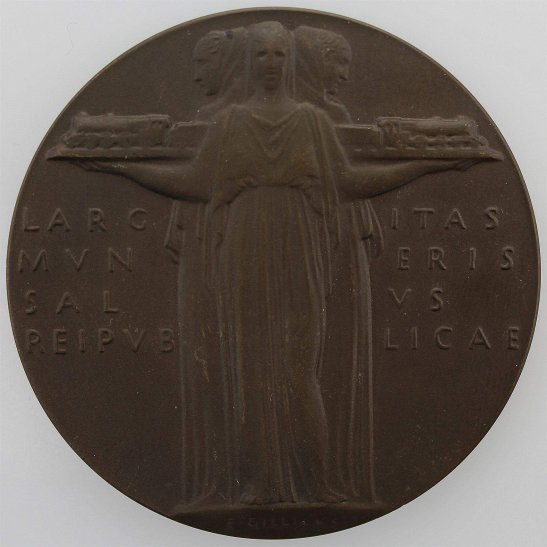 General Strike, bronze Service Medal, 1926, by E. Gillick for the Royal Mint, helmeted figure of Britannia seated holds a laurel wreath, in the field a winged emblem of of the London Midland and Scottish Railway Company between a rose and a thistle, FOR SERVICE IN NATIONAL EMERGENCY MAY 1926, rev. three draped fihures hold locomotives in their outstretched hands, LARGITAS/ MUMERIS// SALUS/ REIPUBLICAE, (THE IMMENSITY OF THE TASK, THE WELL-BEING OF THE COUNTRY). 51 mm, BHM. 4210).  The medal was given to those who had given service on behalf of the London, Midland and Scottish Railway Company. The Mint Report for 1926 records that 7,370 medals were struck in bronze.

The London, Midland and Scottish Railway (LMS) was a British railway company. It was formed on 1 January 1923 under the Railways Act of 1921, which required the grouping of over 120 separate railways into four. The companies merged into the LMS included the London and North Western Railway, Midland Railway, the Lancashire and Yorkshire Railway (which had previously merged with the London and North Western Railway on 1 January 1922), several Scottish railway companies (including the Caledonian Railway), and numerous other, smaller ventures. The resulting company was an unwieldy construction, with numerous interests other than railway operation. Besides being the world's largest transport organisation, it was also the largest commercial enterprise in the British Empire and the United Kingdom's second largest employer, after the Post Office. The LMS also claimed to be the largest joint stock organisation in the world. In 1938, the LMS operated 6,870 miles (11,056 km) of railway (excluding its lines in Northern Ireland), but its profitability was generally disappointing, with a rate of return of only 2.7%. Under the Transport Act 1947, along with the other members of the "Big Four" British railway companies (GWR, LNER and SR), the LMS was nationalised on 1 January 1948, becoming part of the state-owned British Railways. The LMS was the largest of the Big Four railway companies serving routes in England, Northern Ireland, Scotland and Wales.