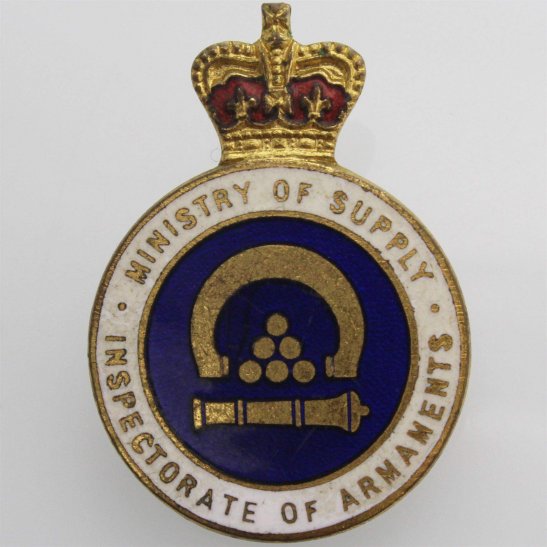 Guaranteed original. Complete & intact. This is an original Ministry of Supply Inspectorate of Armaments lapel badge for sale. In good condition. Please see our other items for more original WW1, WW2 & post war British military badges for sale including other lapel badges.

On War Service 1915 badge The On War Service 1915 badge was issued by the Ministry of Munitions. The earliest versions of these badges have blue enamel similar to the 1914 badge, but the enamel was abandoned in favour of a plain brass stamped design when the scale of the issue requirements became clear. These small, metal badges were worn by civilians during the First World War in order to indicate that the person wearing it was on engaged in important war-work. Several of these badges were officially produced and distributed nationally but many more were produced privately by employing companies to support their employees. Before conscription was introduced in 1916, the army relied on voluntary recruitment. It was assumed by many that a man not in uniform was avoiding joining up and was therefore often accused of shirking their duty to their country. The famous white feather campaign saw men not in uniform presented with a white feather as a symbol of cowardice. The official badges were intended to prove that the wearer was doing their duty to their country in a time of war in a different way. They were not in uniform, but they may have been working in munitions factories or in the dockyards carrying out work that was vital to the war effort. After conscription, the need for these badges faded, along with the white feather campaign. However, many continued to be worn throughout the war, especially by female shift workers for whom the badge could give priority boarding and fare concessions on public transport, as well as indicating that there was nothing disreputable about these ladies travelling alone at night.