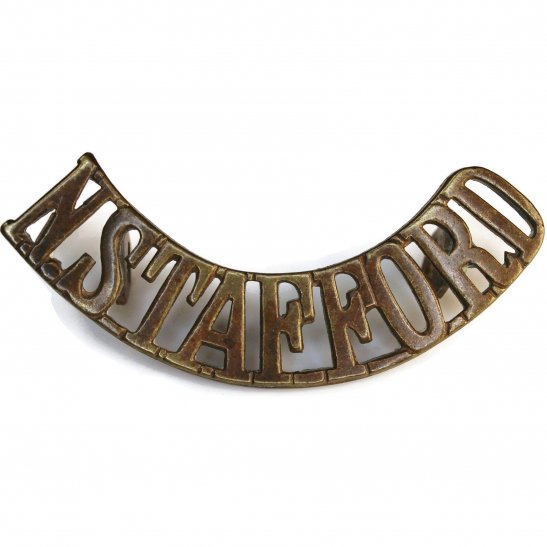 The North Staffordshire Regiment (Prince of Wales's) was an infantry regiment of the British Army, which was in existence between 1881 and 1959. Formed at a time when the British Empire was reaching its peak, the Regiment served all over the Empire, in times of both peace and war, and in many theatres of war outside the Empire. It fought in World War I and World War II, as well as in other smaller conflicts around the world. These other wars included the Second Sudanese War, the Second Boer War, the Anglo-Irish War and the Third Anglo-Afghan War. The North Staffordshire Regiment was heavily committed to the fighting during the First World War, and over the course of the conflict, was expanded to 18 battalions, some by duplication of the Territorial Force battalions and others, labelled "service" battalions raised as part of Field Marshal Kitchener's New Army. These battalions saw service in a number of theatres including on the Western Front, at Gallipoli, in the Middle East, and India. In September 1939, the North Staffordshire Regiment consisted of two regular and two Territorial battalions the 1st, 2nd and 6th and 7th Battalions.

Following the outbreak of the Second World War, the regiment was expanded as it had been during the First World War. This expansion, however, was limited this time only to the addition of two more battalions the 8th and 9th Battalions, raised in 1940. The roles of the two regular battalions were reversed this time, with the 1st Battalion serving in India and Burma throughout the war, while the 2nd Battalion remained in Europe and North Africa.The 2nd Battalion went to France in September 1939 as part of 1st Division of the British Expeditionary Force, and was involved in the Battle of France before eventually being evacuated from Dunkirk on 1 June 1940. Following that, it remained in the United Kingdom until 1943 when, still as part of 1st Division, it sailed to North Africa and took part in the Tunisian Campaign. The battalion did not participate in the invasion of Sicily or the initial invasion of Italy but was one of the lead units for the Anzio landings. As part of 15th Army, the 2nd Battalion continued to serve in Italy until January 1945 when the battalion and the rest of 1st Division were transferred to Palestine. The two Territorial battalions both formed part of 176th Brigade of 59th (Staffordshire) Division. The division spent several years training until it landed in Normandy in June 1944. Only the 6th Battalion landed in France as the 7th Battalion had been transferred in 1942. The 6th Battalion had been in France for less than two months when, in August 1944, along with all the other infantry units of 59th Division, it was broken up to supply replacements to other units.