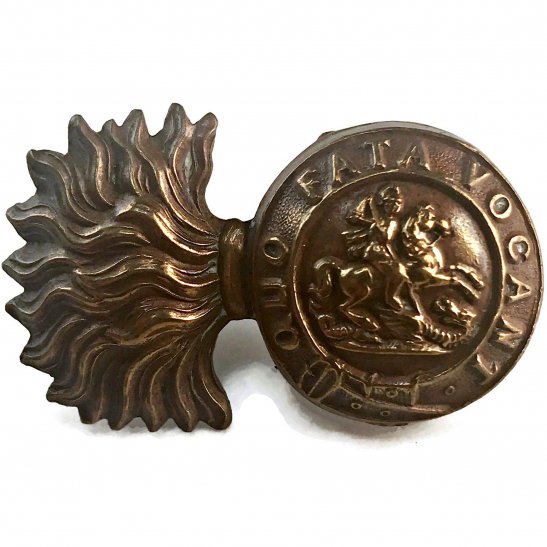 The Royal Northumberland Fusiliers was an infantry regiment of the British Army. Originally raised in 1674 as the 5th Regiment of Foot, the regiment was amalgamated with three other fusilier regiments in 1968 to form the Royal Regiment of Fusiliers. Under the Childers reforms of 1881, the numbered regiments of the line were given new titles, and were linked with a particular recruiting district, usually a county. At the same time the existing militia and rifle volunteer units of the district became battalions of the regiment. The 5th Regiment of Foot was one of the 'Six Old Corps' entitled to use their 'ancient badge' (St George killing the Dragon) on Regimental Colours, drums and other devices rather than the typical GR cipher as used by normal Regiments of the Line, a distinction first officially recorded in 1747. In the centre of their colours was an image of St. George killing the dragon, this being their ancient badge, and in the three corners of their second colour, the rose and crown. The regiment wore a distinctively-coloured hackle or plume on the fusilier cap and later on the beret. The hackle was red over white, and was authorised in June 1829. This replaced the white feather plume the regiment had adopted following the Battle of St Lucia in 1778, supposedly having been taken from the headgear of the fallen French troops. The 5th Foot was the only regiment to wear the white plume (other regiments having white over red) although the right to wear it was only officially granted in 1826.

In 1829 a new model of shako was introduced and all infantry regiments were to wear a white plume, with the 5th Foot given a unique plume of red over white. This became a red over white ball tuft in 1835 and later became a hackle in the same colours. During World War I the Northumberland Fusiliers raised 52 battalions and 29 of them served overseas. The increase in strength was done partly by forming duplicates of existing T.F. battalions, and partly by the creation of new "Service" battalions. An example of the first instance was the 4th Battalion, which the 1/4th in August 1914 on forming a duplicate 2/4th Battalion. A 3/4th Battalion followed in June 1915. Among the Service Battalions were the Tyneside Scottish (20th - 23rd Battalions) and the Tyneside Irish (24th - 27th Battalions), while the 17th (Service) Battalion was formed by staff of the North Eastern Railway, and was involved in railway construction. The Royal Northumberland Fusiliers served in France (1939-1940), North Africa, Singapore, Italy, Egypt, Syria, Palestine, North West Europe (1944-1945), India and Greece. They were awarded twenty-nine battle honours.