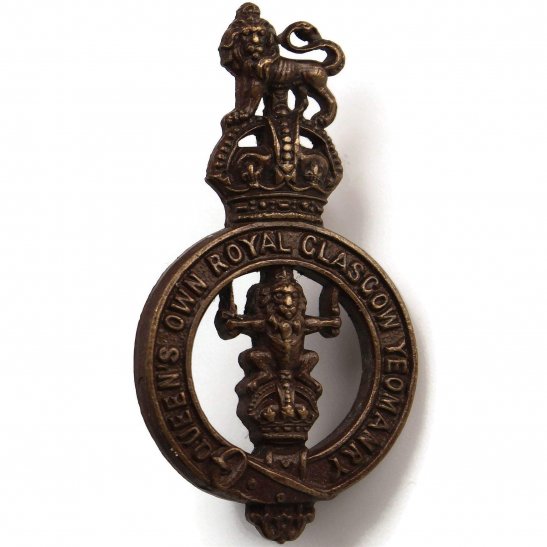 The Queen's Own Royal Glasgow Yeomanry was a yeomanry regiment of the British Army that can trace their formation back to 1796. It saw action in the Second Boer War, the First World War and the Second World War. Prior to 1902 the Regiment wore a dragoon style uniform of dark blue with red facings, which had not altered a great deal since its establishment in 1848. A silver spiked helmet with black plumes was worn by all ranks in full dress. Following the Boer War khaki was introduced for home service but the full dress uniform described above was retained for wear by officers in review order, with the addition of a gold lace covered shoulder and waist belt, gold cord shoulder knots and gold trouser stripes. Other ranks wore a simpler dark bue uniform with peaked cap, chain shoulder-straps, red collar and trouser stripes for walking out dress. In 1943 the 64th (QORGY) Anti-Tank Regiment wore a regimental flash on the right arm beneath the divisional sign that consisted of the letters GY embroidered in on a diamond divided vertically in the RA colours of red and blue.