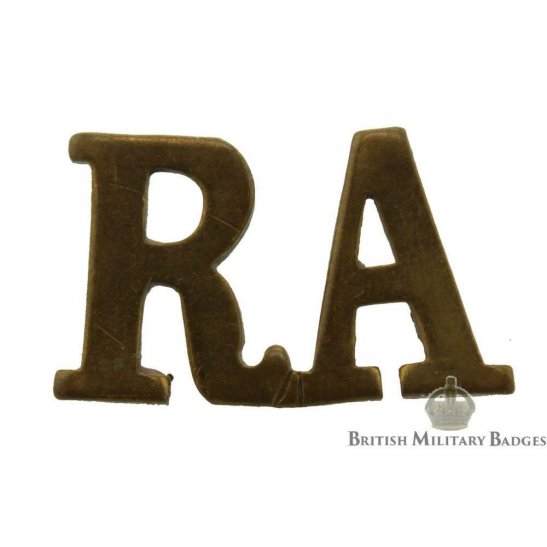 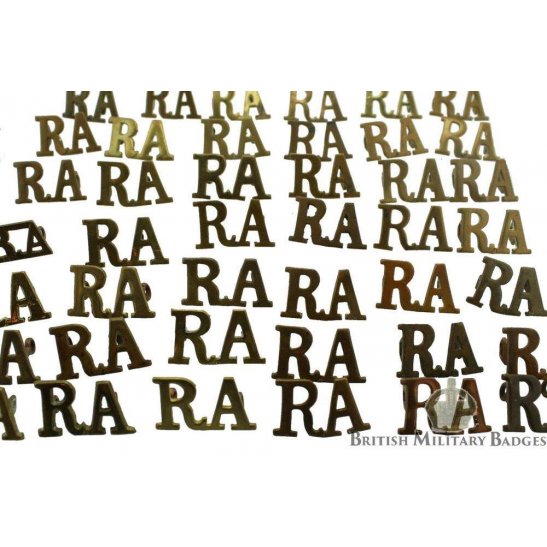 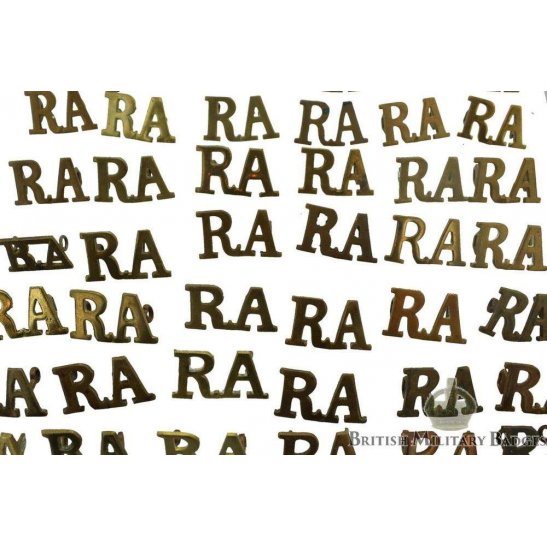 Guaranteed original. Complete & intact. The price is for a SINGLE Royal Artillery RA Regiment shoulder title picked at RANDOM; if you order two or more at the same time, we will try to match them as closely as possible in terms of size, patina etc. but they will NOT be a 100% exact match. If you need an exact pair, please see our other items where we have a 100% exact matching RA pair for sale.

The Royal Regiment of Artillery, commonly referred to as the Royal Artillery (RA), is the artillery arm of the British Army. Despite its name, it comprises a number of regiments. On 1 July 1899, the Royal Artillery was divided into three groups: the Royal Horse Artillery of 21 batteries and the Royal Field Artillery of 95 batteries comprised one group, while the coastal defence, mountain, siege and heavy batteries were split off into another group named the Royal Garrison Artillery of 91 companies. The third group continued to be titled simply Royal Artillery, and was responsible for ammunition storage and supply. Which branch a gunner belonged to was indicated by metal shoulder titles (R.A., R.F.A., R.H.A., or R.G.A.). The RFA and RHA also dressed as mounted men, whereas the RGA dressed like foot soldiers. In 1920 the rank of Bombardier was instituted in the Royal Artillery. The three sections effectively functioned as separate corps. This arrangement lasted until 1924, when the three amalgamated once more to became one regiment. In 1938, RA Brigades were renamed Regiments. During World War II there were over 1 million men serving in 960 gunner regiments. In 1947 the Riding Troop RHA was renamed The King's Troop RHA and, in 1951, the title of the regiment's colonel-in-chief became Captain General. The Royal Horse Artillery, which has always had separate traditions, uniforms and insignia, still retains a separate identity within the regiment. Before the Second World War, Royal Artillery recruits were required to be at least 5 feet 4 inches (1.63 m) tall. Men in mechanised units had to be at least 5 feet 8 inches (1.73 m) tall. They initially enlisted for six years with the colours and a further six years with the reserve or four years and eight years. They trained at the Royal Artillery Depot in Woolwich. From its beginnings, the Royal Artillery has been based at Woolwich, in south-east London. In 2003 it was decided to move the headquarters to Larkhill on Salisbury Plain in Wiltshire (the RA's training ground, where the Royal School of Artillery has been based since 1915). The last Royal Artillery troops left Woolwich Barracks in 2007; in 2012, however, the King's Troop, Royal Horse Artillery was relocated to Woolwich from their former headquarters in St John's Wood.