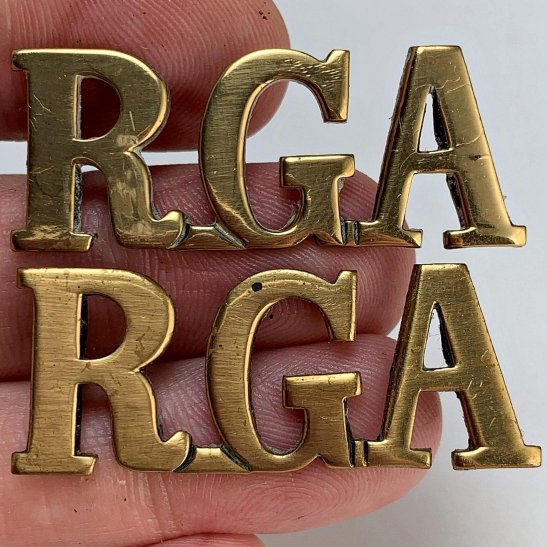 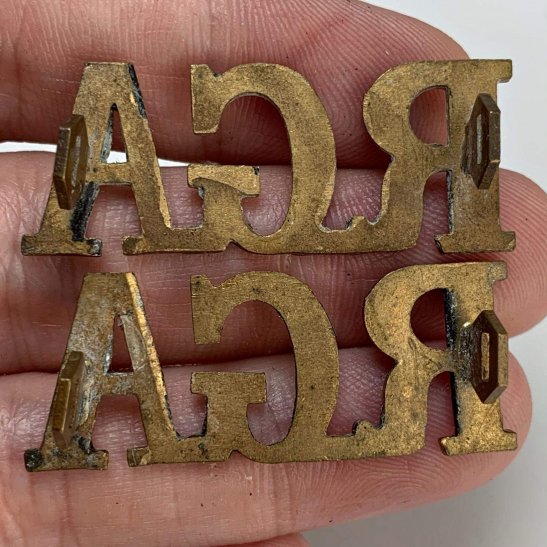 The Royal Garrison Artillery (RGA) was an arm of the Royal Artillery that was originally tasked with manning the guns of the British Empire's forts and fortresses, including coastal artillery batteries, the heavy gun batteries attached to each infantry division, and the guns of the siege artillery. The Royal Garrison Artillery came into existence as a separate entity when existing coastal defence, mountain, siege and heavy batteries of the Royal Artillery were amalgamated into a new sub-branch. A royal warrant provided that from 1 June 1899: "... the mounted and dismounted branches of the Royal Regiment of Artillery shall be separated into two corps... to be named respectively (a) the Royal Horse Artillery and the Royal Field Artillery: (b) the Royal Garrison Artillery." The Royal Regiment of Artillery, thenceforth, was divided into four branches. Other than mounted or unmounted dress, the obvious distinction in uniform was by the shoulder title badges: RGA; RFA; RHA; and RA (for the branch tasked with managing ammunition dumps and supply to units in the field). The RGA retained the badge and dress uniform (dark blue with scarlet facings) of the Royal Regiment of Artillery, but personnel were normally clothed and equipped as dismounted men.

After 1920 all RGA personnel were classified as mounted men, whether serving in horse-drawn, mountain or tractor-drawn batteries, From 1914 when the army possessed very little heavy artillery, the RGA grew into a very large component of the British forces on the battlefield, being armed with heavy, large-calibre guns and howitzers that were positioned some way behind the front line and had immense destructive power. The corps name was discontinued in 1924, when the RGA was re-amalgamated into the Royal Artillery. With the new long-range small arms available to the infantry in the era before World War I, artillery fighting in the infantry line was increasingly brought under fire. The solution to this was the principle of standing off and engaging the enemy with indirect fire. However, even after this became official military doctrine, field and horse artillery on both sides kept trying to fight in the old way. One instance was a gun duel fought between British and German horse artillery units using open sights during the Retreat to the Marne. In the quagmire of trench warfare that followed it was finally realised that it was not the place for the artillery to be in the infantry line. Henceforth the artillery would be positioned well behind the infantry battle line, firing at unseen targets, at co-ordinates on a map calculated with geometry and mathematics. As the war developed, the heavy artillery and the techniques of long-range artillery were massively developed.

The RGA was often supported by the Royal Flying Corps (RFC) who had devised a system where pilots could use wireless telegraphy to help the artillery hit specific targets. The RFC aircraft carried a wireless set and a map and after identifying the position of an enemy target the pilot was able to transmit messages such as A5, B3, etc. in morse code to a RFC land station attached to a heavy artillery units, such as Royal Garrison Artillery Siege Batteries. The Siege batteries (such as 9th Siege Battery at the Battle of the Somme) had the largest guns and howitzers; mounted on railways or on fixed concrete emplacements. Ammunition supply to the Royal Field Artillery (RFA) and other field artillery units was normally the role of the Royal Artillery: that part of the Royal Regiment of Artillery which retained the Royal Artillery (RA) shoulder badges. However during the war the RGA, which had large numbers of men idling in fortified batteries around the World with little chance of seeing action, provided a draft of sub-units to the Western Front to assist with ammunition supply in the field, and the operation of supply dumps.