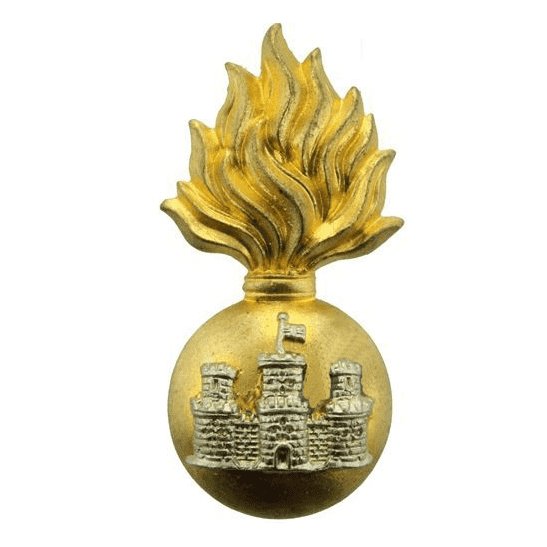 The Royal Inniskilling Fusiliers was an Irish infantry regiment of the British Army formed in 1881 by the amalgamation of the 27th (Inniskilling) Regiment of Foot and the 108th Regiment of Foot. It saw service in the South African War, the First World War and the Second World War, before being amalgamated into the Royal Irish Rangers in 1968. On 1 July 1881 the 27th and 108th were redesignated as the 1st and 2nd Battalions, The Royal Inniskilling Fusiliers respectively. In 1903 the Regiment was granted a grey hackle for their fusilier raccoon skin hats to commeorate the original grey uniforms of the Inniskilling Regiment. The regimental district comprised the City of Londonderry and the counties of Donegal, Londonderry, Tyrone and Fermanagh in Ireland, with its garrison depot located at Omagh. The local militia regiments also became part of the new regiment, becoming the 3rd to 5th (Militia) Battalions. Militarily, the whole of Ireland was administered as a separate command within the United Kingdom with Command Headquarters at Parkgate (Phoenix Park) Dublin, directly under the War Office in London. In October 1899 war broke out between the United Kingdom and the Boer Republics. The 1st Battalion landed at Durban, where they became part of the 5th (Irish) Brigade. The battalion was involved in a series of military reverses at the hands of the Boers that became known as the "Black Week", culminating in defeat at the Battle of Colenso. The unit subsequently took part in the Tugela Campaign before helping relieve Ladysmith in early 1900. The regiment lent its name to "Inniskilling Hill", which was taken by the 5th brigade on 24/25 February 1900.

In 1914 the Great War broke out and the 2nd Battalion was first to see action in the Battle of Le Cateau. The 1st Battalion participated in the Landing at Cape Helles on the Gallipoli peninsula in April 1915 with the 29th Division. There were also nine New Army battalions raised seeing service with the 36th (Ulster) Division and the 16th (Irish) Division on the Western Front and at Gallipoli, the Macedonian Campaign and Palestine. The 12th battalion fought against Irish rebels who were fighting to end British rule in Ireland and to establish the Irish Republic during the Easter Rising of 1916 in Dublin. Two of the Royal Inniskilling Fusiliers were killed and seven more wounded In addition to the 1st and 2nd battalions, the regiment raised three battalions (5th, 6th and 70th) to fight in the war. The 2nd Battalion, as part of the BEF, was among those that were evacuated from Dunkirk after desperate fighting as the rearguard to the retreating BEF. In 1942 the 1st Battalion was flown to Burma to help stem the Japanese advance and in 1943 took part in the operations in the Arakan peninsula. After re-fitting, the 2nd Battalion, as part of Fifth Division, left England in 1942 for the East Indies. Their journey was to take them to Madagascar, where they fought the Vichy French in a brief campaign to ensure that the Japanese did not occupy the island to interdict Allied shipping, India, Persia and Syria before they deployed for Operation HUSKY, the invasion of Sicily followed by that of Italy. During the Italian Campaign, the 6th Battalion would serve in the same theatre as the 2nd but with 38th (Irish) Infantry Brigade. The 6th Battalion fought in the Tunisian Campaign in North Africa and the 2nd Battalion took part in the landings on Sicily and then Italy. The 6th Battalion also fought in Sicily and Italy, most notably at Centuripe in Sicily where its unexpected assault on the hilltop town took the Germans by surprise. In Italy the battalion fought at Cassino and in the pursuit north of Rome but was disbanded after the battles at Lake Trasimene in June 1944; its place in the Irish Brigade was taken by the 2nd Battalion which absorbed many of the personnel of 6th Inniskillings.