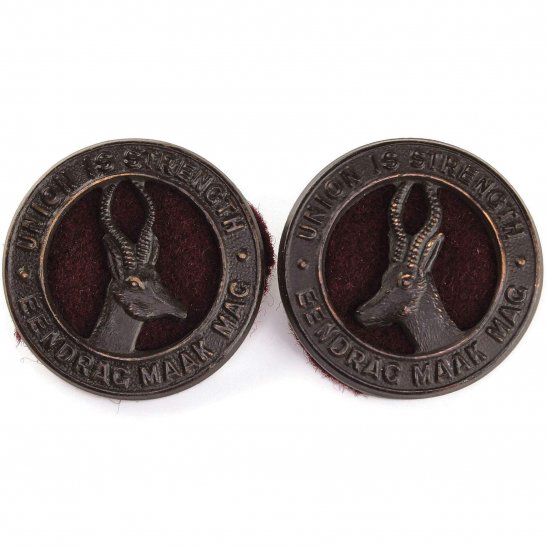 After the Union of South Africa was formed in 1910, General Jan Smuts, the Union's first Minister of Defence, placed a high priority on creating a unified military out of the separate armies of the union's four provinces. When World War I broke out in 1914, the South African government chose to join the war on the side of the Allies. General Louis Botha, the then prime minister, faced widespread Afrikaner opposition to fighting alongside Great Britain so soon after the Second Boer War and had to put down a revolt by some of the more militant elements before he could send an expeditionary force of some 67,000 troops to invade German South-West Africa (now Namibia). The German troops stationed there eventually surrendered to the South African forces in July 1915. (In 1920 South Africa received a League of Nations mandate to govern the former German colony and to prepare it for independence within a few years.)

Later, an infantry brigade and various other supporting units were shipped to France in order to fight on the Western Front. The supporting units included five batteries of heavy artillery, a field ambulance unit, a Royal Engineers signals company and a military hospital. The most costly action that the South African forces on the Western Front fought in was the Battle of Delville Wood in 1916 - of the 3,000 men from the brigade who entered the wood, only 768 emerged unscathed. Another tragic loss of life for the South African forces during the war was the Mendi sinking on 21 February 1917, when the troopship Mendi - while transporting 607 members of the South African Native Labour Corps from Britain to France - was struck and cut almost in half by another ship. More than 146,000 whites, 83,000 blacks and 2,500 people of mixed race ("Coloureds") and Asians served in South African military units during the war, including 43,000 in German South-West Africa and 30,000 on the Western Front. An estimated 3,000 South Africans also joined the Royal Flying Corps. The total South African casualties during the war was about 18,600 with over 12,452 killed - more than 4,600 in the European theater alone.

South Africa's contribution to World War II consisted mainly of supplying troops, men and material for the North African and Italian campaigns. Numerous volunteers also flew for the Royal Air Force. The 1st South African Infantry Division took part in several actions in East Africa in 1940, North Africa in 1941 and 1942, including the Second Battle of El Alamein, before being withdrawn to South Africa. The 2nd South African Infantry Division also took part in a number of actions in North Africa during 1942, but on 21 June 1942 two complete infantry brigades of the division as well as most of the supporting units were captured at the fall of Tobruk. Of the 334,000 men volunteered for full time service in the South African Army during the war (including some 211,000 whites, 77,000 blacks and 46,000 Cape Coloureds and Asians), about 9,000 were killed in action, though the Commonwealth War Graves Commission has records of 11,023 known South African war dead during World War II.