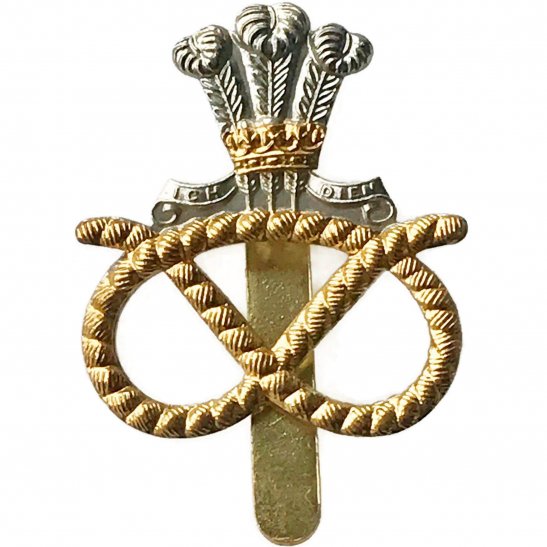 The Staffordshire Regiment (Prince of Wales') (or simply "Staffords" for short) was an infantry regiment of the British Army, part of the Prince of Wales' Division. The regiment was formed in 1959 by the amalgamation of The South Staffordshire Regiment and The North Staffordshire Regiment (Prince of Wales's). In 1962 the regiment undertook a six month exercise in Kenya, followed by a year in Colchester and then a return to Kenya for a further two years. On the tour the regiment had to deal with a mutiny by the Ugandan Army. Returning home the regiment was the last unit of the British Army to serve in East Africa. A home tour in Dover followed in 1964. Then came a two year posting to Berlin in 1968 followed by a tour in Sharjah in the Persian Gulf where the regiment again recorded a 'last unit' distinction being the last unit to serve in Sharjah. The regiment undertook a tour in Northern Ireland during the Troubles in 1972 before moving to Quebec Barracks in Osnabruck in 1973. Further tours in Northern Ireland were undertaken in 1974 and 1976. The regiment moved to Hyderabad Barracks in Colchester later in 1976 before undertaking another tour in Northern Ireland in 1979.

The regiment moved to Gibraltar in 1981 and to Roman Barracks at Colchester in 1983 before undertaking another tour in Northern Ireland in 1984. It then moved to Fallingbostel in 1986 In October 1990 The Staffordshire Regiment was deployed to Saudi Arabia as part of 7th Armoured Brigade (referred to as the 'Desert Rats'). The deployment was in response to the dictator Saddam Hussein's invasion of the sovereign territory of Kuwait, claiming it to rightfully belong to Iraq. The regiment moved to Dale Barracks in Chester in 1991, to Abercorn Barracks in Ballykinler in 1994 and Clive Barracks in Shropshire in 1996. The regiment moved to Mooltan Barracks in Tidworth in 2000. Following a deployment to Kosovo in 2002 and a first deployment to Iraq on Operation Telic 6 in 2005, the regiment undertook a second deployment to Iraq during Operation Telic 9 in 2006. As part of the reorganisation of the infantry announced in 2004, it was announced that the Staffordshire Regiment would merge with the Cheshire Regiment and the Worcestershire and Sherwood Foresters Regiment into a new three-battalion regiment to be called the Mercian Regiment. On 1 September 2007 the Staffordshire Regiment became the 3rd Battalion, The Mercian Regiment.