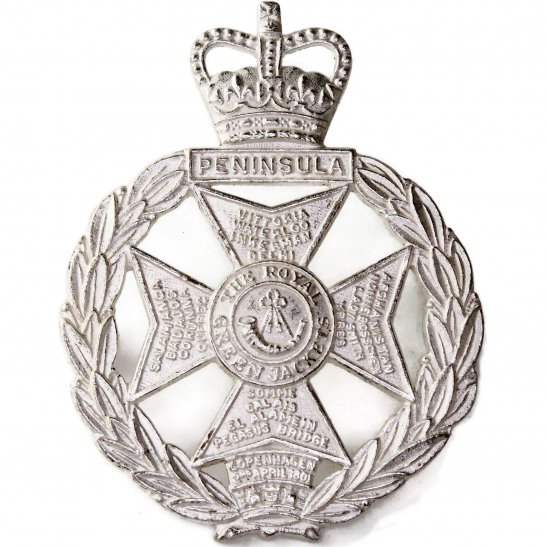 The Royal Green Jackets (RGJ) was an infantry regiment of the British Army, one of two "large regiments" within the Light Division (the other being The Light Infantry). The regiment was formed in 1966 by the amalgamation of the three separate regiments of the Green Jackets Brigade: the 1st Green Jackets (43rd and 52nd), the 2nd Green Jackets the King's Royal Rifle Corps and the 3rd Green Jackets the Rifle Brigade. There were also two Territorial Army battalions made up as follows: 4th(V) Bn Royal Green Jackets - formed from the remnants of the Rangers (KRRC), London Rifle Brigade, Tower Hamlets Rifles, Queens Westminsters, Queen Victoria's Rifles, Queen's Royal Rifles and Civil Service Rifles. 5th(V) Bn Royal Green Jackets - formed from the 4th Bn the Oxfordshire & Buckinghamshire Light Infantry (TA) and the Buckinghamshire Battalion of the Ox & Bucks Light Infantry During the 1980s, the battalions were deployed to various parts of Northern Ireland (Operation Banner). The 1st, 2nd and 3rd battalions were also based in West Germany, Osnabrack (1RGJ), Minden (2RGJ) and Celle (3RGJ). The regiment's greatest loss of life came on 20 July 1982 when seven RGJ bandsmen were killed by a Provisional Irish Republican Army bomb which exploded during a public concert featuring the music from Oliver! to 120 people at the bandstand in Regents Park. In 1992 1st RGJ was disbanded and 2/RGJ and 3/RGJ renumbered 1/RGJ and 2/RGJ respectively.

After the 1992 reorganisation, the unit was mostly based overseas in Dhekelia, Cyprus and Paderborn, Germany as well as in Northern Ireland and saw action in Bosnia and Kosovo during the Yugoslav Wars. Both battalions returned to the UK by 2002 and the 1st battalion served on Operation Telic in Iraq. On 24 November 2005 the Ministry of Defence announced that the regiment would amalgamate with The Light Infantry, the Devonshire and Dorset Light Infantry and the Royal Gloucestershire, Berkshire and Wiltshire Regiment to form a single large regiment to be called The Rifles. The reorganisation into "The Rifles" took effect on 1 February 2007 with the 1st Battalion Royal Green Jackets becoming the 2nd Battalion, The Rifles, the 2nd Battalion Royal Green Jackets becoming 4th Battalion, The Rifles and the surviving Territorial Army companies of 4 & 5 Royal Green Jackets, along with a company of the RGBW becoming the 7th Battalion, The Rifles