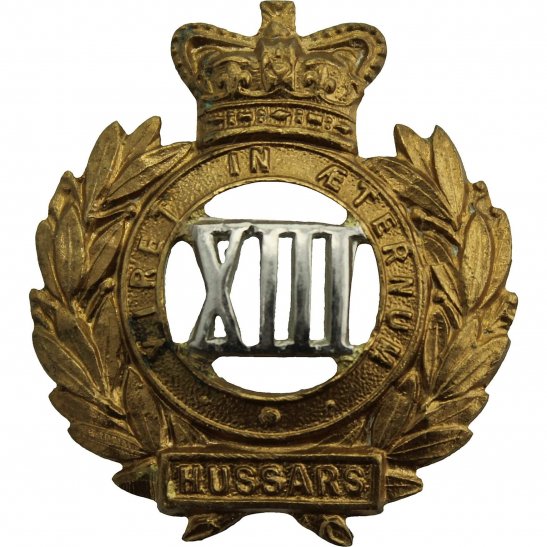 The 13th Hussars (previously the 13th Light Dragoons) was a cavalry regiment of the British Army established in 1715. It saw service for three centuries including the Napoleonic Wars, the Crimean War and the First World War but then amalgamated with the 18th Royal Hussars, to form the 13th/18th Royal Hussars in 1922. The regiment arrived in South Africa in December 1899 and took part in the Battle of Colenso during the Second Boer War. It formed part of Colonel Burn-Murdoch’s Brigade and had a minor part in the relief of Ladysmith in February 1900.

The regiment, which was based in Meerut in India at the start of the war, landed in Marseille as part of the 7th (Meerut) Cavalry Brigade in the 2nd Indian Cavalry Division in December 1914 for action on the Western Front. The regiment then moved to Mesopotamia, with the same brigade, in July 1916. The regiment took part in the Second Battle of Kut in February 1917, the capture of Baghdad in March 1917 and the Battle of Sharqat in October 1918. At Sharquat the regiment charged the hill where the Turkish guns were, and made a dismounted charge up it with fixed bayonets, successfully capturing the guns: İsmail Hakkı Bey, the Turkish commander, was aware of the peace talks at Mudros, and decided to spare his men rather than fight or break out, surrendering on 30 October 1918. In 1922 the regiment amalgamated with the 18th Royal Hussars to form the 13th/18th Royal Hussars.