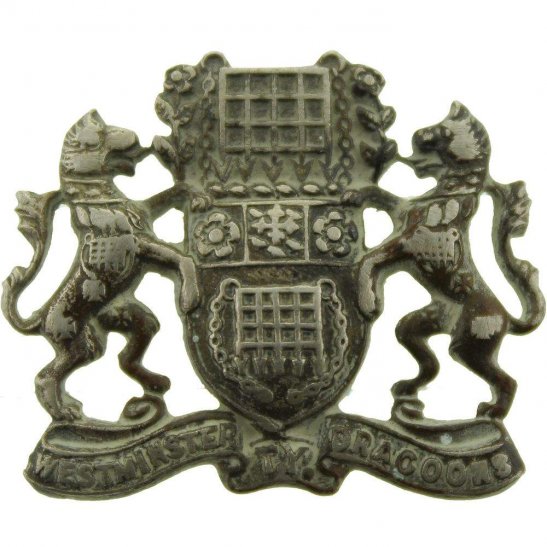 The Westminster Dragoons were Formed in the aftermath of Second Boer War as part of the County of London Yeomanry, the WDs fought in the Battle of Gallipoli and led British forces onto the beaches during the Normandy Invasion in 1944. In 1914, the regiment consisted of four squadrons and was Headquartered at Elverton Street, Westminster, attached to the London Mounted Brigade for training. The First World War broke out while the WDs were on annual camp and they were immediately mobilised. View of Suvla from Battleship Hill. The regiment was posted to Egypt, arriving at Alexandria on 25 September 1914, thereby being one of the first Yeomanry regiments to go overseas on active service. On 19 January 1915 they joined the 1/1st Hertfordshire Yeomanry to form the Yeomanry Mounted Brigade. The brigade joined the 2nd Mounted Division on 13 August and was redesignated as 5th (Yeomanry) Mounted Brigade. It was dismounted to take part in the Gallipoli Campaign; the regiment left a squadron headquarters and two troops (about 100 officers and men) in Egypt to look after the horses. The regiment landed at "A" Beach, Suvla Bay on 18 August and moved into reserve positions at Lala Baba on the night of 20 August. On 21 August it advanced to Chocolate Hill and was in reserve for the attacks on Scimitar Hill and Hill 112. Due to losses during the Battle of Scimitar Hill and wastage during August 1915, the 2nd Mounted Division had to be reorganised. On 4 September 1915, the 1st Composite Mounted Brigade was formed from 1st (1st South Midland), 2nd (2nd South Midland) and 5th (Yeomanry) Mounted Brigades. Each dismounted brigade formed a battalion sized unit, hence the regiment was amalgamated with the Hertfordshire Yeomanry to form 5th Yeomanry Regiment.

Just before the outbreak of the Second World War in 1939, the Westminster Dragoons became an Officer Cadet Training Unit, with over 90 per cent of pre-war WDs gaining their commissions and transferring into units throughout the British Army before the Regiment reverted to an armoured role in 1940. Among them was Captain Philip John Gardner VC MC, who had joined as a trooper before the war, commissioned and then transferred to the Royal Tank Regiment, going on to win the Victoria Cross for saving the life of a badly wounded officer of the King's Dragoon Guards whose armoured car was out of action and under heavy fire. The Germans planted over four million mines along the French coast to hinder the Allied landings in 1944. To break through these defences at the start of the Normandy Invasion, the British produced a number of novel armoured fighting vehicles under the ingenious direction of Major General Percy Hobart, including the Sherman Crab. The Crab bore a rotating drum with dozens of chains attached; these detonated mines in its path to produce a beaten passage through the thickest of minefields. The WDs were trained in this vital task, as part of 79th Armoured Division, led by Hobart. Along with 81 and 82 Squadrons of 6 Assault Regiment Royal Engineers, B and C Squadrons of the Westminster Dragoons were the first units to land on Gold Beach on D-Day in the British sector, clearing paths off the beach and using their tank guns to destroy defences holding up the assault. They went on to fight across northwest Europe and into Germany.