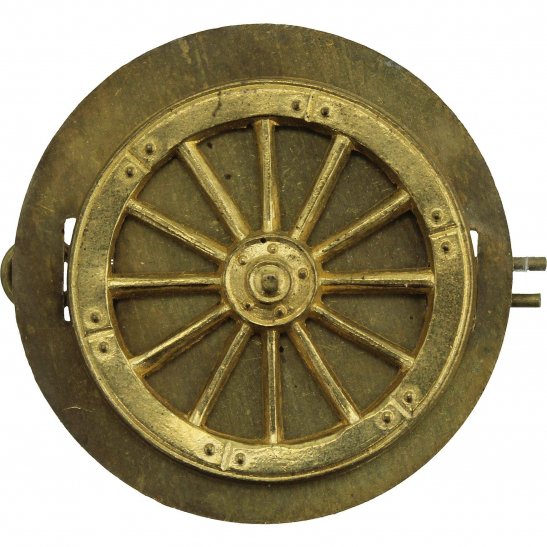 Trade, Proficiency & Skill at Arms Badges The oldest trade badge which was worn by many armies is the crossed axes of the pioneer or sapper which appeared on the arms of these robust gentlemen as early as the Seven Years War. In the British cavalry the Farrier's badge, at first worn on the caps was being worn on the arms of some regiments in the 1830s. Badges for proficiency and skill-at-arms first appeared after the Crimean War to promote efficiency with the weaponry and equipment that the army was using. The badge of crossed muskets was the first, authorized by Royal Warrant in 1856 and originally intended as a prize badge. By 1881 these badges, like rank badges were worn somewhat indiscriminately and regulations for their wear was addressed. For the period 1881-1902 trade, proficiency and skill-at-arms badges worn by cavalry were as follows: SKILL AT ARMS & PROFICIENCY Crossed Rifles: Authorized in 1856. In 1881 was to be worn in yellow worsted by every qualified marksman under the rank of sergeant on the left sleeve below the elbow. By Sergeants and above it was worn above the chevrons on the right sleeve. It was worn in gold wire by the best shot in the troop (later squadron) and when worn with a crown above, it was the best shot in the regiment or depot. Sergeants wore the crowned badge on the lower left sleeve. Sergeants of the best shooting troop/squadron/depot wore the crowned gold badge on their right sleeve below the elbow. The crossed muskets were changed to more modernized rifles with magazines sometime after 1890 presumably after the introduction of the Lee-Metford. Crossed Swords: Authorized 1881. Worn in the same manner as the crossed rifles and for the same reason (swordsmanship) except there does not appear to have been an award for the sergeant of the best squadron. There are some examples of a "Mameluke" style sword (without guard) being worn by some cavalry regiments but not Dragoon Guards or Dragoons. Crossed Lances: Authorized 1881: Not worn by Dragoon Guards and Dragoons until after 1895 (when front ranks were ordered to be armed with lances) and in the same manner. Crossed Signal Flags: Authorized 1881: A proficiency badge to be worn by all qualified signallers on the lower left sleeve and by instructors above chevrons on the right sleeve. Although it was also presented a Prize Badge in 1887, it was never worn with a crown above except for instructors who were also T/SSMs. TRADE Horseshoe: No official Authorization date. Worn by all trained Farriers and Shoe Smiths on the right upper arm and above chevrons if applicable ad on the lower arm above chevrons for the QM Farrier SM. It appears to have been in gold wire whatever the rank. Bit: No official Authorization date. Worn by all trained Collar Makers and Saddlers in the same manner as the horseshoe. Spur: Authorized 1865: Worn neck upwards by Riding Instructors and Rough Riders (horse breakers) in the same manner as the horseshoe. There have always been two different versions of the badge (shown in the illustration) and they are worn indiscriminately, often within the same unit! GOOD CONDUCT Good conduct badges were awarded in the form of chevrons, points upwards, worn by all ranks below corporal in worsted on the lower left sleeve above the cuff decoration and below trade and prize badges. The Chevrons were yellow for all regiments except the 2nd Dragoon Guards where they were white. They were conferred as follows: 2 Years Service: One Chevron, 6 Years Service: Two Chevrons, 12 Years Service: Three Chevrons, 18 Years Service: Four Chevrons, 23 Years Service: Five Chevrons, 28 Years Service: Six Chevrons