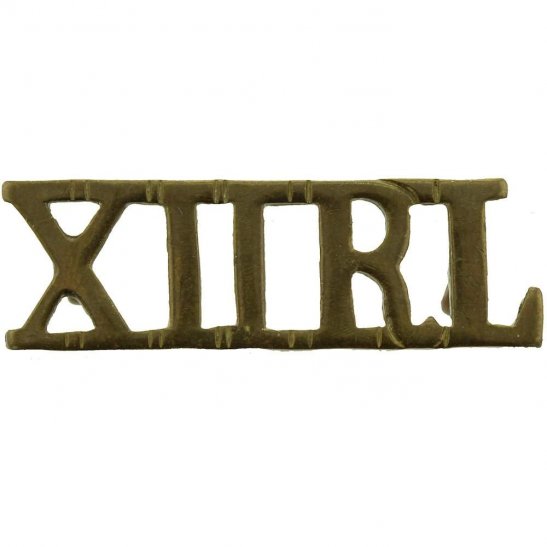 In 1751 the regiment was officially styled the 12th Dragoons. In 1768 King George III bestowed the title of The 12th (Prince of Wales's) Regiment of (Light) Dragoons, the regiment was given the badge of the three ostrich feathers, and the motto "Ich Dien". The 12th Dragoons, led by General Sir John Doyle won their first battle honour in Egypt in 1801 against the French Dromedary corps. They had previously had a young Duke of Wellington serve with them as a subaltern between 1789-91. In 1816, the 12th Light Dragoons were armed with lances after the cavalry of Napoleon's Army had shown their effectiveness at Waterloo and were re-titled 12th (The Prince of Wales's) Regiment of (Light) Dragoons (Lancers). In 1855 they reinforced the Light Cavalry Brigade in the Crimea after the Charge of the Light Brigade at Balaclava. In 1861, they were renamed 12th (The Prince of Wales's) Royal Regiment of Lancers and in 1921 12th Royal Lancers (Prince of Wales's). The British Army removed the lance from its weaponry in 1903, but an influential lobby secured its reinstatement in 1909.

The 12th Lancers served on the Western Front throughout World War I. In the opening, relatively mobile months of the war, cavalry played a vital role. On 28 August 1914, 'C' Squadron of the 12th Lancers, led by Lieutenant-Colonel Wormald, made a successful charge against a dismounted squadron of Prussian Dragoons at Moy. The 9th/12th Royal Lancers celebrate Mons/Moy Day annually, which commemorates the last occasions on which each predecessor regiment charged with lances. In all, 166 officers and men of 12th Lancers died in World War I. In 1928, the 12th Lancers gave up their horses and were equipped with armoured cars, taking over vehicles left in Egypt by two Royal Tank Corps armoured car units, the 3rd and 5th Companies. Late in 1934, the 12th exchanged equipment and station with the 11th Hussars, taking over thirty-four Lanchester armoured cars at Tidworth. Its strength would have been 12 officers and 141 other ranks, organised in a company headquarters and three sections, each with five cars. Total numbers were sixteen cars, six motorcycles, a staff car, four 3 long tons (3 t) and seven 3,360 lb (1,520 kg) (30 cwt) lorries. The 12th Lancers served as an armoured car regiment equipped with the Morris CS9, during the 1940 campaign in France and Flanders, playing a key part in shielding the retreat to Dunkirk. Subsequently, the regiment fought at the Battle of El Alamein with the 1st Armoured Division and then served as a corps-level reconnaissance asset in the Italian Campaign. In 1960, the 12th Royal Lancers (Prince of Wales's) were amalgamated with the 9th Queen's Royal Lancers to form the 9th/12th Royal Lancers (Prince of Wales's).