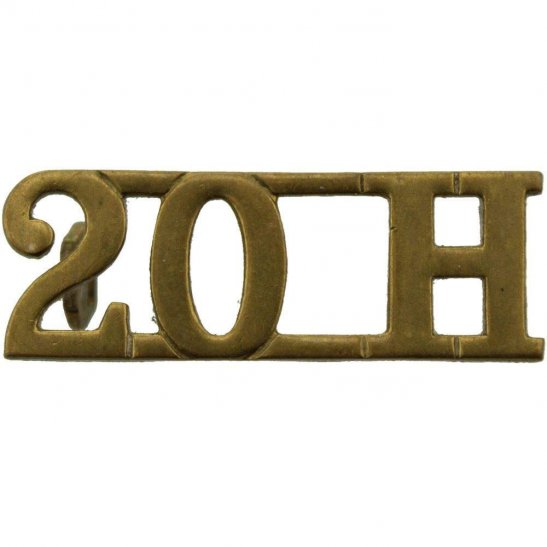 The 20th Hussars was a cavalry regiment of the British Army. In 1922 it was amalgamated with the 14th Hussars to form the 14th/20th Hussars, which became the 14th/20th King's Hussars. The 20th remained in England until 1896, being garrisoned successively at Woolwich, Norwich, Aldershot and Colchester, and then returned to India where it served uneventfully for the next six years, being stationed throughout this time at Mhow, until it was sent to South Africa to take part in the closing stages of the Boer War. Here it took part in Kitchener's operations against the Boer "commandos" of Transvaal and the Orange Free State, participating in the fighting in the early months of 1902. The regiment crossed to France on 17 August 1914 with a strength of 24 officers and 519 rank and file to join the rest of the "contemptible little army". The 20th Hussars formed part of the British cavalry that covered the gap between the British Expeditionary Force and the French 5th Army. The regiment arguably took part in the first cavalry action of the First World War, and became involved in actions that were typical of the role played by cavalry in that conflict.

The retreat from Mons, the battles of the Marne and the Aisne and the First battle of Ypres all saw the regiment involved and fighting as infantry from trenches in the Messines area. A battle at Bourlon Wood was complemented with five officers and 218 men from the 20th; the regiment saw more action on foot at Gouzeaucourt in 1917. Dismounted actions to stem the enemy advance followed the German Spring Offensive of 1918. A return to horses saw the regiment in support of infantry as the tide turned in the Allies' favour and the Germans began the return to their homeland. A nationalist uprising in Turkey caused the allies to send troops to Constantinople, (now Istanbul). The 20th Hussars found themselves on the Izmit or Ismid peninsula in 1920 as part of General Ironside's command with a strength of 13 officers and 523 rank and file on 28 June. The regiment charged Turkish positions in July near the village of Gebze and successfully routed the enemy. Although mounted action did take place in Syria during World War II, this was the last regimental charge ever made by British cavalry. It suffered one casualty, although several horses were also wounded. The 20th were relievedin October 1920 and knowing that amalgamation loomed, transferred some 225 men to the 3rd. Another 118 men transferred before the remainder returned to England and in 1922 the regiment lost its separate identity when it was amalgamated.