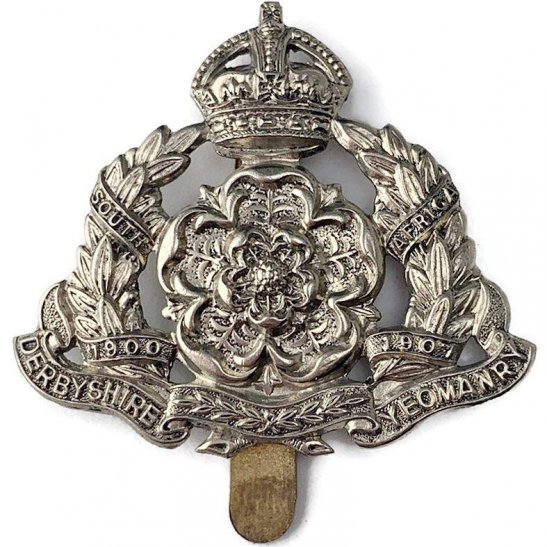 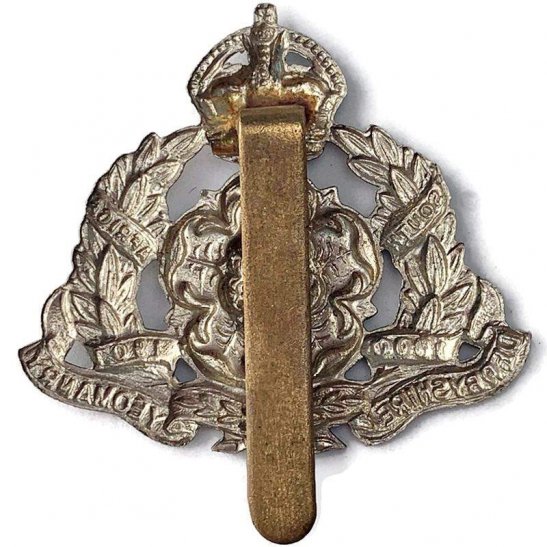 The Derbyshire Yeomanry was a yeomanry unit of the British Army, first raised in 1794, which served as a cavalry regiment and dismounted infantry regiment in the First World War and provided reconnaissance regiments in the Second World War, before being amalgamated into The Leicestershire and Derbyshire (Prince Albert's Own) Yeomanry in 1957. In accordance with the Territorial and Reserve Forces Act 1907 which brought the Territorial Force into being, the TF was intended to be a home defence force for service during wartime and members could not be compelled to serve outside the country. However, on the outbreak of war on 4 August 1914, many members volunteered for Imperial Service. Therefore, TF units were split in August and September 1914 into 1st Line (liable for overseas service) and 2nd Line (home service for those unable or unwilling to serve overseas) units.

Later, a 3rd Line was formed to act as a reserve, providing trained replacements for the 1st and 2nd Line regiments. The regiment mobilised in August 1914 as part of the Nottinghamshire and Derbyshire Mounted Brigade, but remained in England until 1915, when it moved to Egypt with the 7th Mounted Brigade, 2nd Mounted Division. It then sailed for Gallipoli, where it saw action at the Battle of Scimitar Hill, serving as dismounted infantry, and took heavy losses. Returning to Egypt in December, the regiment was employed with the Western Frontier Force in the Senussi Campaign, before moving to Salonika in February 1916. One squadron served with the 27th Division from March to June 1916, whilst the regiment remained as GHQ reserve in Macedonia until the end of the war. The 2nd Line Regiment was raised in September 1914; this remained in the United Kingdom as part of the 9th Mounted Brigade, 2/2nd Mounted Division, it did not see service, and was converted into a cyclist unit in 1916. Some 165 men and four officers from this battalion were drafted to France to reinforce the 14th Battalion, the Durham Light Infantry in October 1916. The 3rd Line Regiment was formed in 1915, which remained in the United Kingdom until it was absorbed into the 4th Reserve Cavalry Regiment in 1917.

The 1st Derbyshire Yeomanry landed in Tunisia in late 1942 as the reconnaissance regiment of the 6th Armoured Division, fighting at Medjez el Bab. During the race to the Tunisian coast, it fought at the Kasserine Pass and Foundouk, finally reaching Tunis in March 1943. The 1st Derbyshire then moved to Italy with the 6th Armoured, where it saw heavy fighting during May 1944, including action at the Battle of Monte Cassino. Through July and August, it fought in the advance to Florence, and in April 1945 saw action at the Argenta Gap and Fossa Cembalina. In 1942, the 2nd Derbyshire Yeomanry fought at the Battle of Alam el Halfa and the Second Battle of El Alamein (as part of 7th Armoured Division). Returning to the United Kingdom in 1943, the 2nd was assigned to 51st (Highland) Infantry Division, where it served as the divisional reconnaissance regiment until the end of the war. It received battle honours for actions in August, fighting at the Dives Crossing, La Vie Crossing and Lisieux during the crossing of the Seine; in September and October, it received honours for fighting on the Lower Maas, and in January 1945 for fighting at Ourthe during the Battle of the Bulge. The regiment received battle honours for fighting in the Rhineland and the Reichswald in February, and crossed the Rhine in March in Operation Plunder.