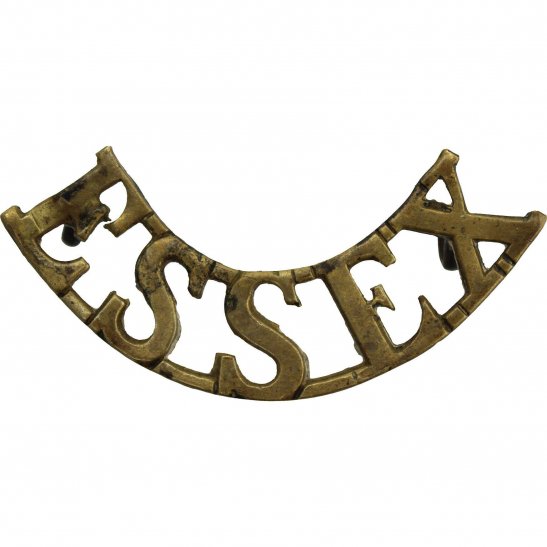 The Essex Regiment was an infantry unit of the British Army that saw active service from 1881 to 1958. Members of the regiment were recruited from across the county of Essex. Today, its lineage is continued by the Royal Anglian Regiment. The Essex Regiment was formed in 1881 by the union of the 44th (East Essex) and 56th (West Essex) Regiments of Foot, which became the 1st and 2nd battalions respectively of the new regiment. This merger was part of the Childers Reforms of the British Army, which also saw the East and West Essex Regiments of Militia joining the Essex Regiment as its 3rd and 4th battalions During World War I, the Essex Regiment provided 30 infantry battalions to the British Army. The 3rd (Special Reserve) (formerly Militia) battalion was mobilised to supply drafts to the two Regular battalions. On the outbreak of war, the Territorial battalions (4th-7th, and 8th (Cyclist) Battalions), all formed second line (2/4-2/8th) and eventually third line (3/4th-3/8th) battalions. Three service battalions (9th, 10th and 11th) and one reserve battalion (12th), were formed from volunteers in 1914 as part of Kitchener's Army. A further service battalion (13th (West Ham)), was raised by the Mayor and Borough of West Ham. Reserve battalions were created as the war progressed, including the 14th (from the depot companies of the 13th), the 15th, 16th and 17th (from provisional battalions), the 18th (Home Service) and 1st and 2nd Garrison Battalions.

The regiment's battle honours for the First World War include Le Cateau, Ypres, Loos, Somme, Cambrai, Gallipoli and Gaza. The 1st Battalion took part in the first day of the Battle of the Somme on 1 July 1916. The battalion, which comprised W, X, Y, and Z companies, took up position in the British trenches at 3:30 am. At 8:40 am, the battalion received orders to advance and clear the German first-line trenches. It was delayed by heavy enemy fire and congestion in the communication trenches. The Newfoundland Regiment advancing to the left of the Essex battalion was almost entirely wiped out as it advanced towards the German lines. At 10:50 am, the Essex companies were in position and received orders to go "over the top". The companies came under heavy artillery and machine gun fire almost as soon as they appeared over the parapet, causing heavy losses. The attack became bogged down in no man's land. The battalion received orders from 88th Brigade headquarters to recommence the attack at 12:30 pm, but at 12:20 pm the battalion commander advised brigade HQ that "owing to casualties and disorganisation", it was impossible to renew the attack. The survivors of the battalion received orders to hold their position along the line of 'Mary Redan' - 'New Trench' - 'Regent Street'.

In WW2, of the Regulars, the 1st Battalion served in British and Indian Infantry Brigades in Sudan, Egypt, Libya, Syria and Burma. The battalion served in the 23rd Infantry Brigade for a few months at the beginning of the war. Rejoining in October 1941, it remained with the brigade until mid-1945, when it joined the 29th Infantry Brigade. It served in Tobruk, then in the campaign in Syria, before moving to India with 70 Infantry Division, which became the core of the Special Force. The brigade's role changed to Long Range Penetration in September 1943; the 1st Battalion formed 44 and 56 Columns of the Chindits and operated in the Japanese rear during the battles of Imphal and Kohima. The battalion had the rare achievement of fighting against the Italians, Germans, French and Japanese. The 2nd Battalion was part of the independent 56th Infantry Brigade. This brigade was landed on Gold Beach on D-Day from roughly 1.00 pm and immediately set off inland. Taking part in the battle of Le Havre, elements of the regiment discovered the German payroll for the Le Havre garrison in the basement of the hospital. At the onset of war, the two remaining Territorial battalions once again raised duplicate units; all four (1/4th, 2/4th, 1/5th and 2/5th) began the war in the 161st Infantry Brigade, but 2/4th was immediately detached to help form the duplicate 163rd Infantry Brigade. Both brigades were initially part of the 54th (East Anglian) Infantry Division, but in January 1941, 161 Bde was sent by sea to Sierra Leone in West Africa. The 8th Battalion was raised at Warley on 4 July 1940 and served in the 210th and 226th Independent Infantry Brigades. On 1 December 1941, the battalion was converted to armour, becoming the 153rd Regiment Royal Armoured Corps. While the men donned the black beret of the RAC, they continued to wear their Essex cap badge. During the conversion, surplus personnel were formed into 'R' Company, Essex Regiment, which soon afterwards was designated as V Corps HQ Defence Company. On formation, 153 RAC joined 34 Army Tank Brigade, with which it fought in Normandy. The regiment was disbanded in August 1944.