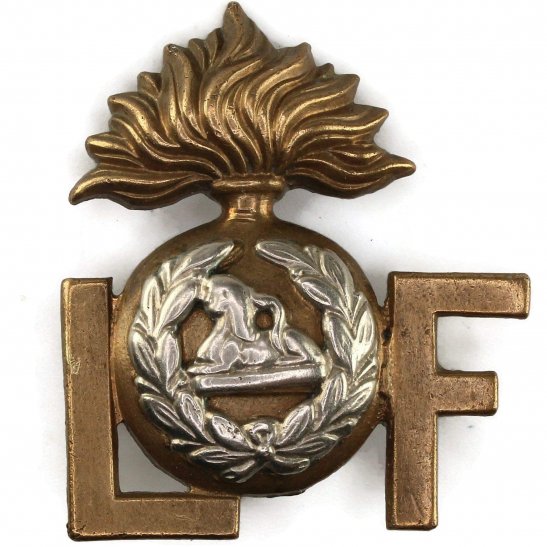 The Lancashire Fusiliers was a British infantry regiment that was amalgamated with other Fusilier regiments in 1968 to form the Royal Regiment of Fusiliers. Some of the Regiments most famous soldiers are Edward Cornwallis, James Wolfe, John Parr, Robert Ross and J. R. R. Tolkien. The regiment became the Lancashire Fusiliers in 1881. Under the 1881 Childers Reforms each county regiment had two Militia battalions attached to it: these were found by the 7th Royal Lancashire Militia, raised in 1855 and recruited from Bury, Manchester and Salford. This formed the 3rd and 4th Battalions of the Lancashire Fusiliers. In addition, Rifle Volunteer Corps were attached to their local regiments. In 1883 the 8th Lancashire Rifle Volunteers (raised at Bury on 22 August 1859) became the 1st Volunteer Battalion, Lancashire Fusiliers, and the 12th Lancashire Rifle Volunteers (originally the 24th, raised at Rochdale in February 1860) became the 2nd VB. In 1886 the 56th Lancashire Rifle Volunteers (raised at Salford on 5 March 1860) was transferred from the Manchester Regiment to become the 3rd VB. The Lancashire Fusiliers raised thirty battalions for World War I and was represented in every campaign of the war. At the initial landings of the Gallipoli Campaign at Cape Helles on 25 April 1915, six Victoria Crosses were awarded to 1st Battalion Lancashire Fusiliers - 'the six VCs before breakfast'. The landing spot was later known as 'Lancashire Landing'. Shortly afterwards, the four Territorial battalions from the regiment in 125th (Lancashire Fusiliers) Brigade landed at Helles and took part in the Second Battle of Krithia (6-8 May) under command of the 29th Division. The brigade later rejoined the 42nd (East Lancashire) Division for the Third Battle of Krithia and Battle of Krithia Vineyard. A subsequent landing further north at Suvla Bay took place on the night of 6/7 August. The Kitchener volunteers of 9th Battalion Lancashire Fusiliers, part of 34th Brigade of 11th (Northern) Division, waded ashore in deep water and darkness and were pinned down on the beach losing their CO and a number of officers. The regiment, like most British regiments in the war, sent the majority of its battalions to the Western Front. During the Battle of the Somme there were eleven battalions of the regiment that saw action in the campaign including three Pals battalions (The Salford Pals) and three Bantam battalions. The famous fantasy author J. R. R. Tolkien served in this regiment from 1915 until contracting "trench fever" during the Battle of the Somme in October 1916.

The Lancashire Fusiliers raised seventeen battalions for service in the Second World War. 1st Battalion: After recovering its numbers from the First World War the battalion spent the interwar years based in various garrisons around the British Empire. In 1939 the battalion was based in India. During the Burma Campaign the 1st Battalion fought with various units until 1943 when it became a Chindit formation with the 77th Indian Brigade under Brig. Orde Wingate. The battalion was involved in both major Chindit operations suffering many casualties before the war ended. 1st/5th Battalion: In 1941 this Territorial Army (TA) Battalion was converted to armour as 108th Regiment Royal Armoured Corps (Lancashire Fusiliers). Units converted in this way continued to wear their infantry cap badge on the black beret of the RAC. 1st/6th Battalion: In 1941 this TA Battalion was converted to armour as 109th Regiment Royal Armoured Corps. 1st/8th Battalion: This TA battalion began the war in 125th Brigade, but while in France with the British Expeditionary Force it exchanged into the Regular 2nd Infantry Division. During Battle of France, the 1/8th Lancashire Fusiliers, along with battalions of the Royal Norfolks and the Royal Scots, were overrun on 26-27 May 1940 around the village of Locon, 2 kilometres north of Bethune by advancing German troops. Several massacres of Allied prisoners took place shortly thereafter, primarily by the German SS Totenkopf Division. Later the battalion served in the Burma Campaign. 2nd Battalion: From the outbreak to 1940, 2nd Lancashire Fusiliers fought in France and Belgium, until being forced to retreat to Dunkirk and withdraw back to Britain, where they stayed until 1942. They then served in North Africa, Medjez El Bab, Sicily, and Italy (as part of the Gothic Line). The last surviving member of the 2nd Battalion, Wallace Jackson, died on Thursday 12 November 2009 aged 89 years.