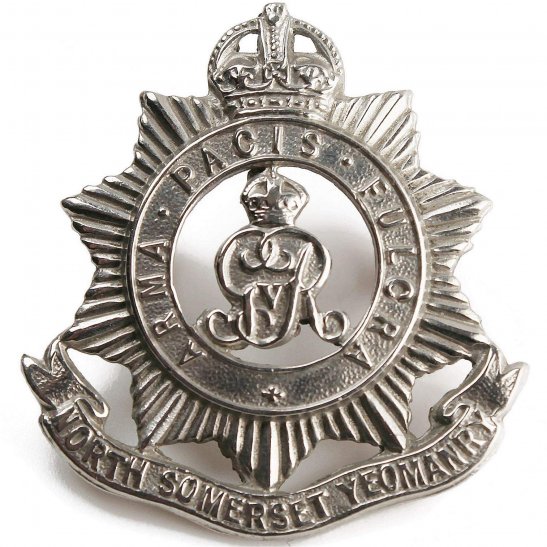 The North Somerset Yeomanry was first raised in Frome in 1798. The 1st Line regiment mobilised at Bath in August 1914 as part of the 1st South Western Mounted Brigade. In October 1914 it moved to Sussex with the brigade, but left it shortly afterwards. It landed in France on 3 November and joined the 6th Cavalry Brigade, 3rd Cavalry Division on 13 November, replacing the 10th Hussars who moved to the newly formed 8th Cavalry Brigade As such, it was one of only six yeomanry regiments to be posted to a regular cavalry division in the war. Trench warfare meant there was little scope for cavalry operations. Nevertheless, in 1915 the brigade and division took part in the Second Battle of Ypres (Battle of Frezenberg Ridge, 11-13 May) and the Battle of Loos (26-28 September). 1916 saw no notable actions, but in 1917 the division saw action in the Battle of Arras (First Battle of the Scarpe, 9-12 April). At other times, the regiment served in the trenches as part of a dismounted regiment under the command of the brigade commander. The regiment left 6th Cavalry Brigade on 10 March 1918. Originally it was slated to become a cyclist unit, then to form a machine gun battalion with the Leicestershire Yeomanry. The German Spring Offensive forestalled this plan, and the regiment was remounted and returned to the Cavalry Corps. From April 1918 it was split up with a squadron joining each regiment in 6th Cavalry Brigade (3rd Dragoon Guards, 1st Dragoons and 10th Hussars).

The 2nd Line regiment was formed in 1914 and in January 1915 it joined 2/1st South Western Mounted Brigade. In May it was in the Calne area, it moved in September to the Canterbury area and to the Colchester area in March 1916. On 31 March 1916, the remaining Mounted Brigades were ordered to be numbered in a single sequence;[8] the brigade became the 15th Mounted Brigade and joined 4th Mounted Division. In July 1916, the regiment was converted to a cyclist unit in 6th Cyclist Brigade, 2nd Cyclist Division (4th Mounted Division redesignated). In November 1916 the 2nd Cyclist Division was broken up and the regiment was merged with the 2/1st Royal Wiltshire Yeomanry to form 10th (Wiltshire and North Somerset) Yeomanry Cyclist Regiment in 4th Cyclist Brigade in the Ipswich area. In March 1917 it resumed its identity as 2/1st North Somerset Yeomanry, still in 4th Cyclist Brigade at Ipswich. In July it was at Wivenhoe and in November at Walton-on-the-Naze. Early in 1918, the regiment moved to Ireland with 4th Cyclist Brigade and was stationed in Dublin; there was no further change before the end of the war. During World War II, the Regiment was first employed in the Far East, then fought in Syria, and in 1943 was converted to the Royal Corps of Signals unit. As Air Formation Signals it served in the Western Desert, Sicily, Italy, and North West Europe.