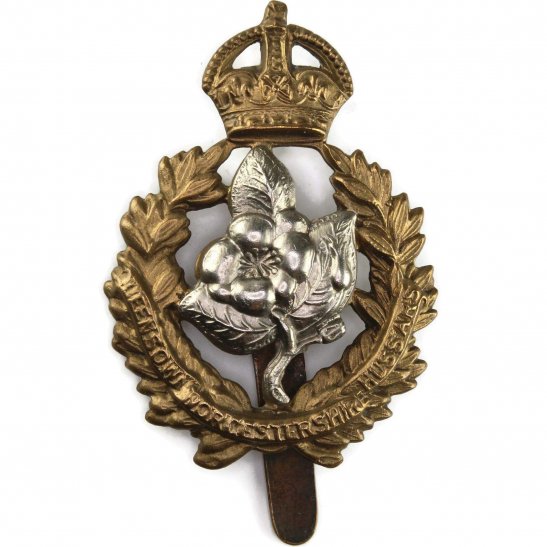 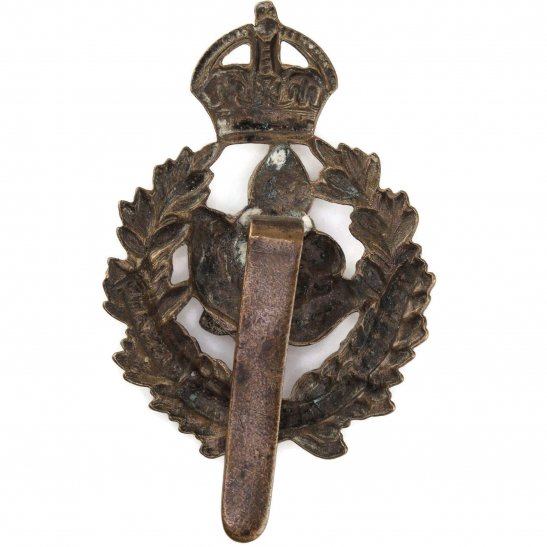 The Queen's Own Worcestershire Hussars were formed in 1794, as the Worcestershire Yeomanry, when King George III, was on the throne, William Pitt the Younger was the Prime Minister of Great Britain, and across the English Channel, Britain was faced by a French nation that had recently guillotined its King and possessed a revolutionary army numbering half a million men. The Prime Minister proposed that the counties form a force of Volunteer Yeomanry Cavalry which could be called on by the King to defend the country against invasion or by the Lord Lieutenant to subdue any civil disorder within the country. The Earl of Dudley who took command of the Worcestershire Yeomanry Cavalry in November 1913 was already convinced that another European war was approaching. He appointed a permanent staff of instructors who trained the Regiment in musketry. War was declared in August 1914 and the Worcestershires formed part of the 1st South Midland Mounted Brigade commanded by Brigadier E.A. Wiggin. The Brigade was ordered to Egypt and was based in Chatby Camp, close to Alexandria, by April 1915.

In August the Brigade were informed they were to fight as infantry, and were sent to Suvla Bay, and took part in the Gallipoli campaign. The Regiment were in support of the Anzacs and other British soldiers, in an attempt to break through the Turkish defences. These Turkish defences on the hills overlooking the beaches proved too strong and Gallipoli was evacuated in January 1916. The Regiment was sent to Egypt, where their casualties were replaced by fresh troops from England and the Regiment was sent to protect the eastern side of the Suez Canal. The Regiment dug wells and sent out patrols for reconnaissance to establish the location of the Turkish attack, the Regiment being responsible for patrolling the whole of the Qatia water area. The small isolated garrison at Oghratine had been ordered to protect a party of engineers on a well-digging expedition, when at dawn on 23 April 1916, 3,000 Turkish troops, including a machine gun battery of 12 guns, attacked. The defending troops repulsed the first attack but were forced back by the weight of the onslaught. The defenders' only machine gun was put out of action early in the attack and all the gunners were killed or wounded. The victorious Turkish troops then advancede to reinforce the attack taking place against the small garrison at Qatia. Qatia fell to the Turkish forces with the loss of all of the Yeomanry's officers except a Major W.H. Wiggin who was wounded and managed to withdraw with about half the squadron. Anzac troops, who occupied both Qatia and Oghradine four days later, testified to the ferocity of the battle and paid tribute to the valour and tenacity of the defenders. The Turkish army regrouped at Gaza and made a stand which brought the British advance to a halt until the arrival of General Edmund Allenby, who reorganised the army and allowed them to conduct operations towards the Turkish positions at Beersheba. The resulting operation took the Turkish forces by surprise and they were forced to withdraw. In the pursuit that followed the Worcestershire Yeomanry with the Warwickshire Yeomanry took part in the last cavalry charge on guns in British Military history, the Charge at Huj. The 2nd Line regiment was formed at Worcester in September 1914. In April 1915 it joined the 2/1st South Midland Mounted Brigade at Cirencester and in June moved to King's Lynn where the brigade joined the 2/2nd Mounted Division. In July 1915, the regiment was at Holkham Hall. In March 1916, the brigade was redesignated as 10th Mounted Brigade and the division as 3rd Mounted Division.

In July 1916, the regiment was converted to a cyclist unit in 8th Cyclist Brigade, 2nd Cyclist Division and was stationed at Tunbridge Wells. In November 1916, the division was broken up and regiment was merged with the 2/1st Royal Gloucestershire Hussars to form 12th (Gloucestershire and Worcestershire) Yeomanry Cyclist Regiment in 4th Cyclist Brigade at Ipswich. In March 1917, it resumed its identity as 2/1st Queen's Own Worcestershire Hussars. In April 1917 it moved to Wivenhoe, by November at Frinton and then to Manningtree. About April 1918 the regiment moved to Ireland and was stationed at Dublin where it remained, still in 4th Cyclist Brigade, until the end of the war. The 3rd Line regiment was formed in 1915; in the summer it was affiliated to a Reserve Cavalry Regiment at Tidworth. In the summer of 1916 it was affiliated to the 4th Reserve Cavalry Regiment, still at Tidworth. Early in 1917 it was absorbed into the 5th Reserve Cavalry Regiment, also at Tidworth. By 1938 a new war with Germany was near and the Regiment was chosen to convert into an anti tank Regiment. Its eighteen-pounders were replaced by two-pounders and the 53rd Worcestershire Yeomanry Anti-tank regiment R.A. came into being. This Regiment consisted of four batteries; the 209 at Kidderminster, the 210 and 212 at Kings Heath and the 211 at Bewdley.