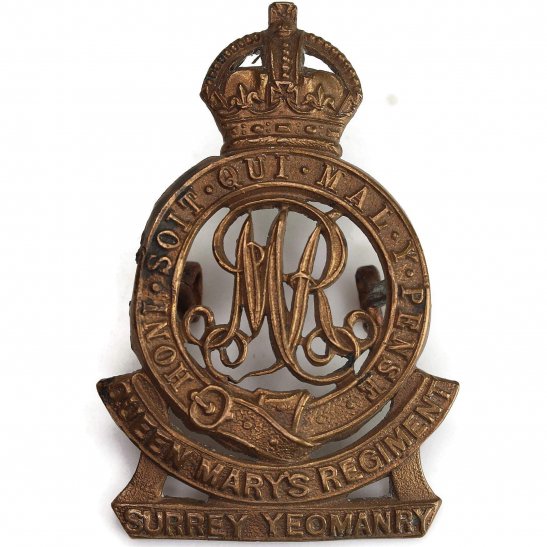 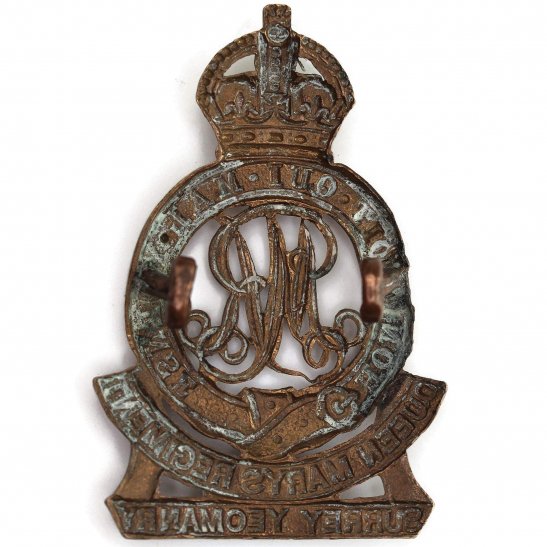 The Surrey Yeomanry was a unit of the British Army formed as volunteer cavalry in 1794 during the French Revolutionary Wars. In 1901 the Regiment was granted the title Princess of Wales's which was changed to Queen Mary's when George V became the King. Converted to artillery in 1922, they were later reduced to battery strength and merged into the Queen's Regiment. On mobilisation the Surrey Yeomanry now known as the 1/1st Surrey Yeomanry was attached to the South Eastern Mounted Brigade of the 1st Mounted Division. In late 1914 the regiment was split up, with the Regimental Headquarters and A Squadron being attached to the 27th Division ; B Squadron joined the 28th Division while C Squadron joined the 29th Division. C Squadron would see service in the Dardanelles campaign at Gallipoli in 1916 moved to France as the XV Corps Cavalry squadron which lasted until July 1917 when they were dismounted and sent to be retrained as infantry, before being drafted into the 10th Battalion Royal West Surrey Regiment in September 1917. In December 1916 the regiments A and B Squadrons reformed to become the XVI Corps Cavalry Regiment in Salonika.

The 2nd Line regiment was formed at Clapham in September 1914 and moved to Dorking. In May 1915 it went to Maresfield, in September to Wrotham and in the winter of 1915-16 it was at Hastings, possibly in 1/1st South Western Mounted Brigade which became 2/1st Southern Mounted Brigade. On 31 March 1916, the remaining Mounted Brigades were ordered to be numbered in a single sequence; the brigade was numbered as 16th Mounted Brigade and joined 4th Mounted Division in the Manningtree area. In July 1916, 4th Mounted Division became 2nd Cyclist Division and the regiment was converted to a cyclist unit in 7th Cyclist Brigade at Woodbridge . In November 1916 the division was broken up and the regiment was merged with the 2/1st Sussex Yeomanry to form 8th (Surrey and Sussex) Yeomanry Cyclist Regiment in 3rd Cyclist Brigade at Ipswich. In March 1917 it resumed its identity as 2/1st Surrey Yeomanry at Ipswich, and in July moved back to the Woodbridge area. In May 1918, the regiment moved with 3rd Cyclist Brigade to Ireland. It was stationed at Athlone and Galway; there was no further change before the end of the war.