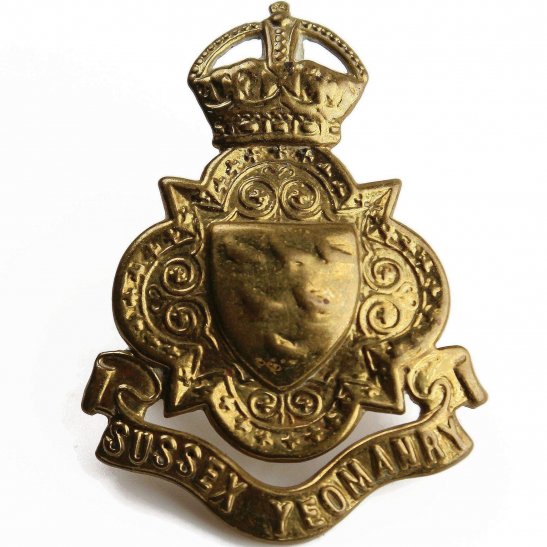 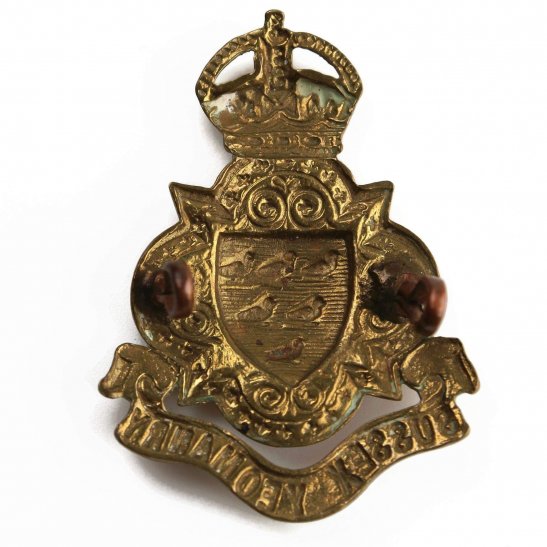 The Sussex Yeomanry was a yeomanry regiment of the British Army formed in 1794, with its last remnants disbanding finally in 1999. It was initially formed when there was a threat of French invasion during the Napoleonic Wars. In accordance with the Territorial and Reserve Forces Act 1907 which brought the Territorial Force into being, the TF was intended to be a home defence force for service during wartime and members could not be compelled to serve outside the country. However, on the outbreak of war on 4 August 1914, many members volunteered for Imperial Service. Therefore, TF units were split in August and September 1914 into 1st Line (liable for overseas service) and 2nd Line (home service for those unable or unwilling to serve overseas) units. Later, a 3rd Line was formed to act as a reserve, providing trained replacements for the 1st and 2nd Line regiments. The 1st Line regiment was mobilised on 4 August 1914 at the outbreak of the First World War and was in the Canterbury area (under Second Army of Central Force) until September 1915. It was dismounted and left Kent for Liverpool; on 24 September it boarded RMS Olympic and sailed the next day. It arrived at Lemnos on 1 October. The regiment landed in Gallipoli on 8 October and was attached to the 42nd (East Lancashire) Division. Within days of the landing the Regiment reported many men suffering from enteritis. While at Gallipoli they spent time in the trenches at Border Barricade and Fusilier Bluff. On 30 December it was evacuated to Mudros with 42nd Division; it left the Division at Mudros on 2 January 1916. The brigade, with the regiment, was withdrawn to Egypt in February 1916 and formed part of the Suez Canal Defences. On 22 February, South Eastern Mounted Brigade was absorbed into the 3rd Dismounted Brigade (along with the Eastern Mounted Brigade). The brigade served as part of the Suez Canal Defences from 14 March to 26 July attached to 42nd (East Lancashire) Division; it then joined the Western Frontier Force. By the end of the year, it was back on the Suez.

With the 74th Division, the battalion took part in the invasion of Palestine in 1917 and 1918. It fought in the Second and Third Battles of Gaza (including the capture of Beersheba and the Sheria Position). At the end of 1917, it took part in the capture and defence of Jerusalem and in March 1918 in the Battle of Tell 'Asur. On 3 April 1918, the Division was warned that it would move to France and by 30 April 1918 had completed embarkation at Alexandria. In May 1918, the battalion landed at Marseilles, France with 74th (Yeomanry) Division. It served in France and Flanders with the division for the rest of the war. By 18 May, the division had concentrated around Rue in the Abbeville area. Here the dismounted Yeomanry underwent training for service on the Western Front, particularly gas defence. On 14 July 1918 the Yeomanry Division went into the line for the first time, near Merville on the right of XI Corps. From September 1918, as part of III Corps of Fourth Army, it took part in the Hundred Days Offensive including the Second Battle of the Somme (Second Battle of Bapaume) and the Battles of the Hindenburg Line (Battle of epehy). In October and November 1918 it took part in the Final Advance in Artois and Flanders. By the Armistice it was near Tournai, Belgium, still with 74th (Yeomanry) Division. With the end of the war, the troops of 74th Division were engaged in railway repair work and education was undertaken while demobilisation began. The division and its subformations were disbanded on 10 July 1919.