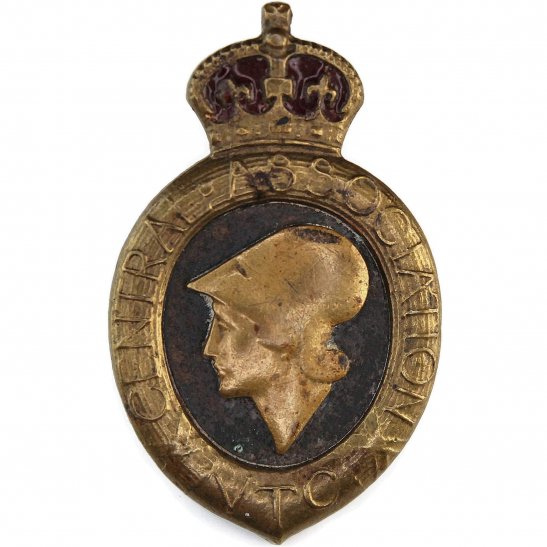 After war had been declared in August 1914, there was an immediate demand for a means of service for those men who were over military age or engaged in important occupations. Combined with the perceived risk of a German invasion, this resulted in the spontaneous formation of illegal "town guards" and volunteer defence associations around the country, often organised by former Regular Army or Volunteer Force officers. By September 1914, a central committee had been formed and on 19 November 1914, a renamed Central Association of Volunteer Training Corps was recognised by the War Office. Lord Desborough became the President of the Association and General Sir O'Moore Creagh VC was appointed the Military Advisor. Although the Central Association had been officially recognized, the new Volunteer Training Battalions were not. Units had to be financially self-supporting and members had to provide their own uniforms, which could not be khaki; the Association recommended Lovat green. All members were required to wear a red brassard or arm band, bearing the letters "GR" for Georgius Rex. No weapons or equipment were provided, although local Territorial Army Associations were asked to supply a few "DP" rifles, which were dummy weapons intended for "Drill Purposes". Membership of the Corps was only open to those who had "genuine reasons" for not enlisting in the regular armed forces. In October 1915, the Marquess of Lincolnshire attempted to give the Volunteers legal status by means of a private member's bill in the House of Lords. but it ran out of parliamentary time. However, MPs discovered that the Volunteer Act 1863 had never been repealed and the VTC Battalions legally became Volunteer Regiments in July 1915.

In August 1916, the War Office decided to include the VTC Battalions into the County Infantry Regiment system, and they became numbered "Volunteer" battalions of their local regiment.[5] With the introduction of conscription in 1916, came the power of the Military Service Tribunals to order men to join the VTC; however, the clause in the 1863 act which allowed resignation after fourteen days' notice made it unenforceable, so a Volunteer Act 1916 was passed which obliged members to remain in the Corps until the end of the war. By February 1918, there were 285,000 Volunteers, 101,000 of whom had been directed to the Corps by the Tribunals. During 1917, P.14 Enfield Rifles began to be issued, followed by Hotchkiss Mk I machine guns.[7] The Corps trained in drill and, if the equipment was available, use of the rifle. In case of a German invasion, battalions were tasked with roles such as line of communication defence and forming the garrison of major towns; 42 battalions were to defend London. Volunteers undertook a wide range of other tasks including; guarding vulnerable points, munitions handling, digging anti-invasion defence lines, assisting with harvesting, fire fighting and transport for wounded soldiers. In 1918, when there was an acute shortage of manpower because of the German spring offensive, 13,000 Volunteers undertook three-month coast defence duties in East Anglia. The force was sometimes ridiculed by the public; there were jokes that the "GR" on their armbands stood for "George's Wrecks", "Grandpa's Regiment", "Genuine Relics", "Gorgeous Wrecks" or "Government Rejects".