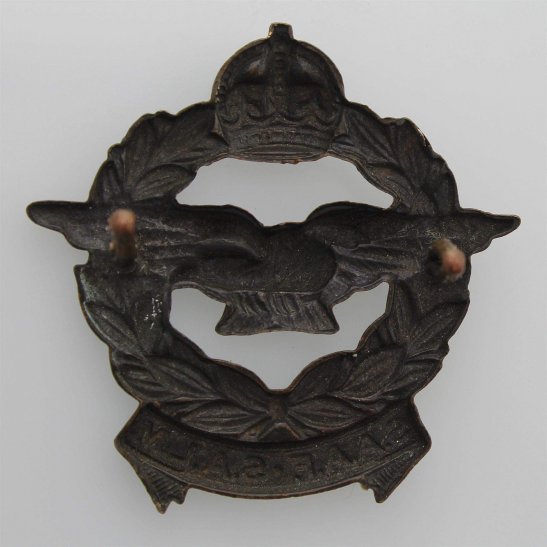 On conclusion of the First World War, the British Government donated surplus aircraft plus spares and sufficient equipment to provide the nucleus of a fledgling air force to each of its Dominions. As part of this donation, which was to become known as the Imperial Gift, South Africa received a total of 113 aircraft from both the British Government (100 aircraft) as well as from other sources (13 aircraft). On the 1 February 1920 Colonel Pierre van Ryneveld was appointed as the Director Air Service with the task of forming an air force, the date is used to mark the founding of the South African Air Force. In December 1920 the South African National insignia was added to aircraft for the first time. An Orange, Green, Red and Blue roundel was added to an Avro 504K for trial purposes but the colours were found to be unsuitable and were replaced with a Green, Red, Lemon, Yellow and Blue roundel in December 1921. These colours remained until 1927 when they were replaced with the Orange, White and Blue roundels. The first operational deployment of the newly formed Air Force was to quell internal dissent, when in 1922 a miner's strike on the Johannesburg gold mines turned violent and led to the declaration of martial law. 1 Squadron was called to fly reconnaissance missions and to bombard the strikers' positions. Sorties in support of the police amounted to 127 flight hours between 10 and 15 March and this inauspicious start for the SAAF led to two pilot losses, two wounded and two aircraft lost to ground fire.

The SAAF was again deployed to suppress the Bondelzwart Rebellion at Kalkfontein between 29 May and 3 July 1922. At the outbreak of World War Two, South Africa had no naval vessels and the UDF's first priority was to ensure the safety of the South African coastal waters as well as the strategically important Cape sea-route. For maritime patrol operations, the SAAF took over all 29 passenger aircraft of South African Airways: 18 Junkers Ju 86Z-ls for maritime patrols and eleven Junkers Ju 52s for transport purposes. SAAF maritime patrols commenced on 21 September 1939 with 16 Squadron flying three JU-86Z's from Walvis Bay.[16] By 1940, the Ju 86s were replaced by Ansons and SAAF Coastal Command had been established, eventually consisting of 6, 10, 22, 23, 25, 27 and 29 Squadrons. By the end of World War II in August 1945, SAAF aircraft (in conjunction with British and Dutch aircraft stationed in South Africa) had intercepted 17 enemy ships, assisted in the rescue of 437 survivors of sunken ships, attacked 26 of the 36 enemy submarines that operated around the South African coast, and flown 15,000 coastal patrol sorties.