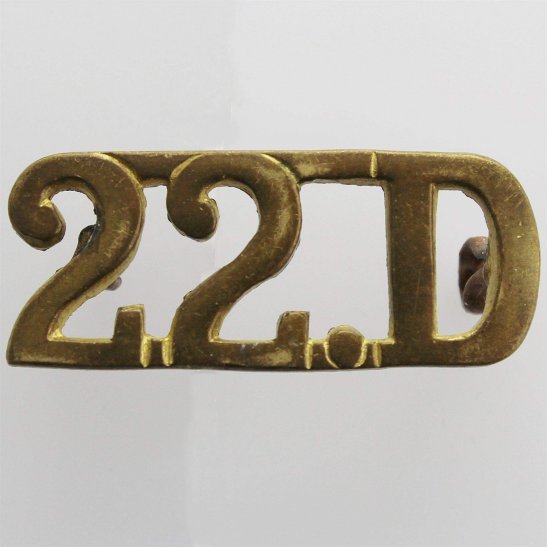 On 1 December 1940, the regiment was restored to the Army List. The new 22nd Dragoons was formed from cadres taken from the 4th/7th Royal Dragoon Guards and 5th Royal Inniskilling Dragoon Guards. The regimental crest, used on the headstones of the regiment's dead, combined the 4th/7th Royal Dragoon Guard's Star of St Patrick with the Castle of Inniskilling to represent the 5th Inniskilling Dragoon Guards - the 4th/7th and Inniskillings are now amalgamated as the Royal Dragoon Guards and have adopted a capbadge that is very similar to this. The regiment was assigned to 29th Armoured Brigade in 11th Armoured Division, but later was transferred to 30th Armoured Brigade in the same division. This changeover was due to the regimental loyalties of the brigade commanders. In 1942, 30 Armoured Brigade was transferred to 42nd Armoured Division before finally joining 79th Armoured Division in 1943. All three regiments of the 30th Armoured Brigade were re-equipped with Sherman Crab Flail Tanks - M4 Sherman tanks modified by attaching a large jib, covered in chains, to the front of the vehicle. The idea being that the tanks would clear a path through a minefield by slowly driving along flogging the ground ahead of them and, hopefully, exploding the mines; to be effective, the tanks had to drive at no more than one and half miles per hour. Tank units thus equipped were not generally used as entire regiments, rather they were split up into troop or squadron-sized formations in support of organised set piece attacks. As such, the regiment came ashore in the first wave of the Operation Overlord landings on the morning of 6 June 1944, with A Squadron, reinforced by two troops of C Squadron and supported by two troops of the Westminster Dragoons, landing on Sword Beach and B Squadron landing on Juno Beach. Later in the day, the final two troops of C Squadron landed on Juno, where they remained for several days on beach clearance duties. Once the beaches were cleared, the regiment saw sporadic action in the fighting through Belgium and the Netherlands into Germany, where they were at the end of the war; the regiment was disbanded in Germany on 30 November 1945. The regiment was awarded ten battle honours for operations in the North West Europe Theatre.