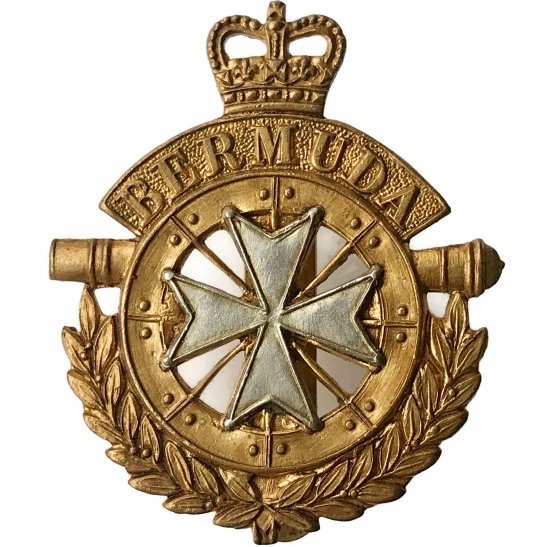 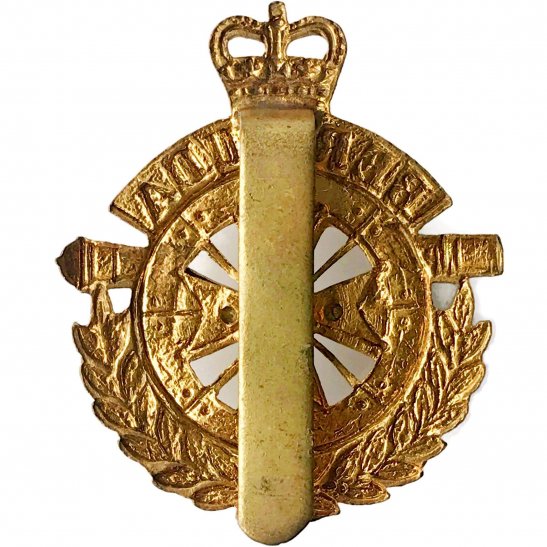 The Bermuda Regiment is the home defence unit of the British Overseas Territory of Bermuda. It is a single territorial infantry battalion that was formed by the amalgamation in 1965 of two originally voluntary units, the all white Bermuda Volunteer Rifle Corps (BVRC) and the mostly black Bermuda Militia Artillery (BMA). The amalgamation of the forces took place on 1 September 1965. The new Bermuda Regiment's stand of colours was presented by Princess Margaret. Princess Margaret presented a second stand of colours to replace the first in 1990, to mark the Bermuda Regiment's 25th anniversary. The Bermuda Regiment is not entitled to inherit the battle honours of the units amalgamated into it, so they are not displayed on its colours and are rarely mentioned. The battle honours it inherits from the BVRC, all from World War I, are Ypres 1915, Neuve Chapelle, Loos, Somme 1916, Ypres 1917, Lys, Hindenburg Line, Messines 1917, Somme 1918 (the BMA had no battle honours specific to itself to hand down, although its contingents had taken part in battles such as Vimy Ridge and the Somme, and as part of the Royal Regiment of Artillery, it had the honour ubique; everywhere). This is ostensibly due to the gap formed by the disbandment of the BVRC and the formation of the Bermuda Rifles, although a skeleton command structure remained after the BVRC's 1946 disbandment and was brought back up to strength to form the Bermuda Rifles in 1951. Originally a volunteer unit, the BVRC (and BMA) had also been briefly disbanded after the First World War. On that occasion, it had been re-embodied as a territorial (a process that had taken place in Britain and Ireland in 1908 when the Volunteer Force, Militia, and Yeomanry had been merged, their units linked to Regular Army regiments and terms of service introduced for recruits, who were no longer permitted to quit their service with 14 days notice) although it had continued to be titled as a volunteer rifle corps until 1951.

The latest set of Colours were presented by HRH Duchess of Gloucester, GCVO at the National Sports Centre on 13 November 2010. The former set will be retired to the Bermuda National Museum, before being formally laid up in the Warrant Officers' and Sergeants' Mess. The third set of Colours have been donated by the Bermuda Regiment Charitable Trust. Originally, the part-time reserve units in Bermuda, the Channel Islands and Malta had numbered collectively as 28th in the British Army order of precedence, but were ordered within that according to the order of their parent corps in the regular army. This meant, that the Bermuda Militia Artillery (BMA), as part of the Royal Regiment of Artillery, preceded the Bermuda Volunteer Rifle Corps (BVRC) despite being the second of the two to be raised. Today, the Bermuda Regiment, as an amalgam of the BMA and BVRC, is 28th. The badge of the Bermuda Regiment combines elements from those of the Royal Regiment of Artillery, and the BVRC. The full badge, as displayed on the Colours, features two crossed cannons creating an X behind a Maltese cross (the symbol of rifle regiments in the British Army, and used on the white metal BVRC badge), set on a circular shield with "THE BERMUDA REGIMENT" inscribed around it, and the whole enclosed within a wreath and surmounted by the Crown. The cap badge is bi-metal - all brass, except a white metal Maltese cross, which is set inside the wheel of a cannon (taken from the badge of the Royal Artillery), with a half-wreath about the lower hemisphere of the badge. Flashes, and other colour marks used on dress and elsewhere (such as backgrounds on signs about Warwick Camp) are red and blue, reflecting the colours of the Royal Artillery, but the stable belt (issued only to permanent staff, officers and senior ranks) worn is rifle green, with black edges, referring to the colours used by the BVRC.