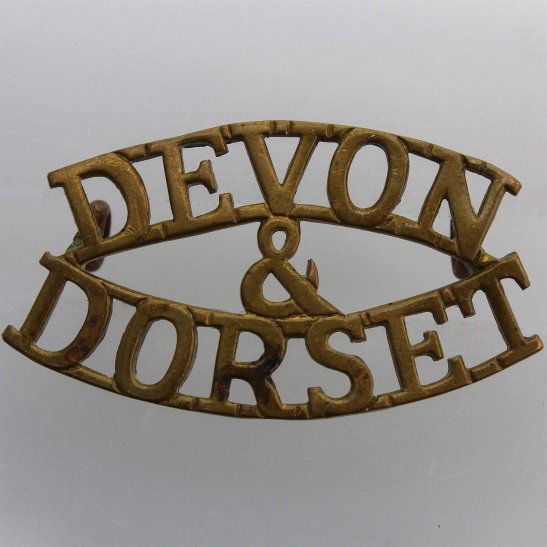 The Devonshire and Dorset Regiment, usually just known as the Devon and Dorsets, was an infantry regiment of the British Army formed in 1958 by the amalgamation of two county regiments. As part of the 1957 Defence Review, it was announced that there would be a reduction in the number of infantry battalions in the British Army. The reduction was to be effected by the merging of a number of pairs of regiments. The amalgamation took place in Minden, Germany, on 17 May 1958. The new 1st Battalion, Devonshire and Dorset Regiment was commanded by Lieutenant-Colonel Guy Young, formerly commanding officer of the 1st Devonshires, while the colonel of the regiment was Major-General George Neville Wood, formerly of the Dorsets. In November 1958 the 1st Battalion moved to Cyprus, where they carried out anti-insurgency activities against the paramilitary EOKA organisation. A ceasefire was called in December 1959, and the island achieved independence from Britain in August 1960. Following the ending of the conflict the battalion carried out exercises in Libya before returning to the United Kingdom in 1961. In February 1966 the battalion joined the British Army of the Rhine (BAOR) as part of 6th Infantry Brigade based in Munster. In 1967 disturbances spread throughout the Arab world in the wake of the Six-Day War. The battalion were dispatched to Benghazi in Libya to evacuate isolated British personnel.

In January 1968 the regiment were transferred within the BAOR to the 12th Infantry Brigade based in Osnabrack. In 1970 the battalion moved to Malta. Following the outbreak of "The Troubles" in Northern Ireland, the Devon and Dorsets were moved to Belfast with less than twenty four hours notice in June 1970. They found themselves involved in the "Battle of the Falls". They returned to Malta in August 1970. In May 1976 the battalion rejoined the 12th Mechanised Brigade in Osnabrack. They did two tours of duty in Northern Ireland: in North Belfast from January to May 1977 and in Central Belfast from January to May 1979. In April 1980 the battalion moved to Colchester. From July to November 1981 they did another tour in County Armagh under Operation Banner, and in 1982 took part in training exercises in Kenya. In the summer of 1982, the Regiment provided a ceremonial guard for the Tower of London. In March 1983 the Devon & Dorsets became a resident battalion at Abercorn Barracks in Ballykinler in Northern Ireland as part of the 39th Infantry Brigade, remaining there until 1985. In 1985 they joined the Berlin Brigade, remaining in the city until 1987. From February 1987 the battalion formed part of 1st Brigade at Bulford. Elements of the regiment were sent to the Falkland Islands and Belize in 1987 and 1988. From April to August 1989 they did another tour of duty in County Armagh. In May 1995 the battalion the United Nations Protection Force intervening in the Bosnian War. Corporal Simon Harvey was awarded the Military Cross for twice extracting his Warrior tracked armoured vehicle from enemy fire on the Mount Igman route into Sarajevo. For part of the campaign they served alongside the French 2e Regiment Itranger d'Infanterie, and a bond of friendship was later established between the two units.