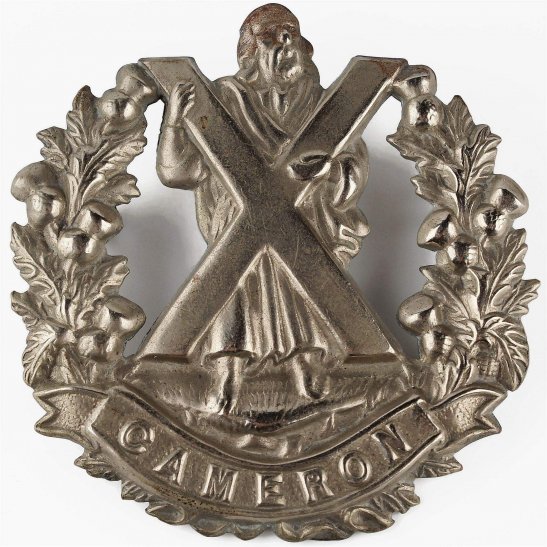 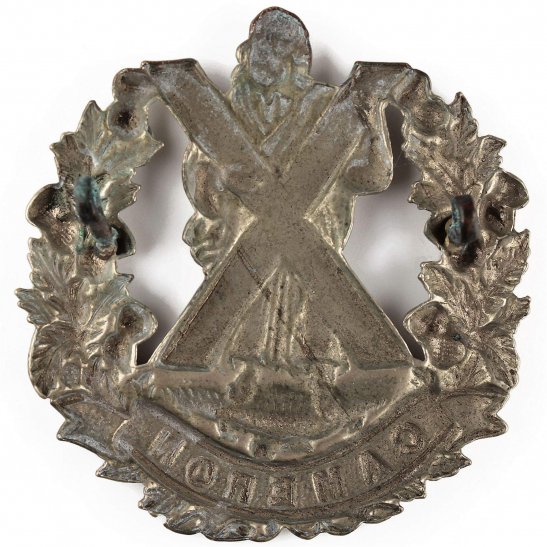 The Queen's Own Cameron Highlanders was an infantry regiment of the British Army formed in 1793. In 1961 it was merged with the Seaforth Highlanders (Ross-shire Buffs, The Duke of Albany's) to form the Queen's Own Highlanders (Seaforth and Camerons). The regiment's lineage is now continued by The Highlanders, 4th Battalion of the Royal Regiment of Scotland. On April 17, 1873 Queen Victoria presented the regiment with new colours at Parkhurst, Isle of Wight, and directed they should in future be known as the "Queen's Own". Consequently they became the 79th Regiment, The Queen's Own Cameron Highlanders. The regiment's dark green facings, worn since 1793, were replaced with royal blue. The regiment moved to Gibraltar in 1879. On July 1, 1881 the 79th foot was redesignated as 1st Battalion The Queen's Own Cameron Highlanders, the county regiment of Inverness-shire. The Camerons were the only infantry regiment to have a single regular battalion. The 1881 reforms also combined the militia and rifle volunteers of the county with the 79th Foot, becoming the 2nd (Militia) Battalion and the 1st (1st Inverness-shire Highland) Volunteer Battalion. In 1897 a 2nd regular battalion was raised, and the Militia battalion was renumbered to 3rd. In 1886, the new depot for the regiment, Cameron Barracks, was completed in Inverness by the Royal Engineers. In 1882 the 1st Battalion moved from Gibraltar to Egypt, where they took part in the invasion and occupation of the country and the Battle of Tel-el-Kebir. They remained in Egypt until 1884, when it took part in an expedition to Sudan. The Battalion returned to the UK in 1887. In 1897 a 2nd Battalion was formed, remaining at home stations and Gibraltar while the 1st Battalion returned to Egypt and the Sudan.

From 1900-1902 the 1st Battalion fought in the Second Boer War before returning to the UK. Noted Australian soldier Harry "Breaker" Morant was executed for murder by a firing squad of Cameron Highlanders in Pretoria gaol (South Africa) on 27 February 1902. The 2nd Battalion then served overseas garrisons in Malta, Crete, China and India. In 1908 the Territorial and Reserve Forces Act 1907 reorganised the reserve battalions of the regiment. The Militia Battalion was transferred to the Special Reserve while the Volunteer Battalion became the 4th Battalion in the new Territorial Force. During the First World War, The Cameron Highlanders was expanded to thirteen battalions, of which nine were in battle. The 1st, 2nd, 4th (TF), 5th, 6th, 7th, 9th and 11th Battalions all fought on the Western Front. Ten representative battle honours were chosen to be displayed on the King's Colour: Marne 1914, '18, Aisne, 1914, Ypres 1914, '15, '17, '18, Neuve Chapelle, Loos, Somme, 1916, '18, Delville Wood, Arras, 1917, '18, Sambre, Macedonia, 1915, '18.

The 1st Battalion was posted to India 1919 - 1934 (including Burma, which was part of British India, 1925 - 1930), The Sudan in 1934 remaining there until 1936 upon which the battalion returned to Catterick, North Yorkshire where it remained until 1939. The 2nd Battalion was posted at various garrisons in the UK. In 1935 the 2nd Battalion moved to Palestine then Egypt. The 1st Battalion returned to England in 1936. In 1920 the Territorial Force became the Territorial Army, and the 4th Battalion was reformed. In 1937 the Liverpool Scottish, previously a TA battalion of the King's Regiment (Liverpool) was affiliated to the Camerons. In 1939 the TA was doubled in size with a duplicate 5th unit being formed as the 5th Battalion (TA) and 2nd Battalion, Liverpool Scottish. On September 1, 1921 the regiment was granted an additional badge: the cypher of Queen Victoria within The Garter to be borne on the four coners of the regimental colour. Four battalions of the Cameron Highlanders served in World War II, and ten representative battle honours were chosen to be borne on the King's Colour: Saint-Omer-La Bassee (a battle on the retreat to Dunkirk, May 1940), Reichswald, Rhine, Keren, Sidi Barrani, El Alamein, Akarit a Wadi in Tunisia, Gothic Line, Kohima, Mandalay.